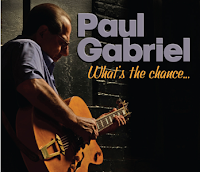 The disciples of Duke Robillard continue to grow and produce interesting CDs for the blues world to enjoy.  Robillard has produced this CD and appears along with Mark Naftalin on piano, Steve Pastir on guitar and the Roomful of Blues Horns (Rich Lataille and Mark Earley on sax and Doug Woolverton on trumpet.  Hailing from Connecticut, this guitar player is also backed by a band comprised of Billy Bileca on bass, Nick Longo on drums and Larry “Buzzy” Fallstrom on keys.
A local success, Gabriel emerges on a grander scale with this release.  Having played and recorded with Harry Chapin, Rory Block and Michael Bolton, Gabriel is the real deal.  He has been associated with Duke for twenty years and the styles are certainly similar as he learned at the feet of his master, even working together for long periods at Duke’s house.  Mixing the blues with R&B and jazz, Gabriel has a cool and effusive style of play. He also wrote all but two of the tracks here and covers one song.

I really enjoyed the guitar interplay and the bigger band feel of this CD.  These guys are great accompanying each other and are very together. They seamlessly trade off solos and blend together beautifully.

Gabriel opens with a swinging jump blues that feature Gabriel, Robillard and theHorns prominently.  It’s a great starter.  Following that is “Ride, Ride, Ride” with more great guitar,Folstrom on piano and a driving beat,

The covered song is Chris Kenner’s “Something You Got,” a Big Easy classic where Gabriel and Duke both put on a show.  There are a couple of very cool instrumentals here, too.  Gabriel ‘s “328 Chauncey Street,” a jazzy and swinging cut where he picks out some great solos along with the Duke and Bruce Bears impresses on organ.  “C.M.C.” is the other instrumental in a similar vein, but this time with Fallstrom on B3 and Bears on piano.  Very thoughtful and jazzy.

Two of the tracks are a bit tongue in cheek, :Devil’s Daugher” and “Fine At’tire.” The former describes the women he tenuously got involved with and the latter is a trendy throwback with Gabriel singing an Naftalin on piano without the rest of the musicians.  Well done!

I enjoyed the CD overall.  One area that I was least impressed were the vocals.  The delivery is sort of monotone at times, where Gabriel gets a bit nasal and breathy.  It’ not bad, but it just doesn't vary a lot in his approach to singing.  But other than that minor criticism, if you are a Robbilard/Roomful of Blues aficionado then you will enjoy this CD.  Gabriel gives us some great new songs and guitar work and the backing players are all in synch and support each other to the max.  Another New England jump blues success story!