Tell You What reviewed by Dennis Barker 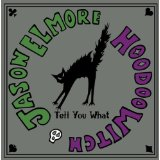 Texas based vocalist, guitarist, songwriter Jason Elmore, along with bassist Chris Waw and drummer Mike Talbot, has released a set of twelve tracks, eight originals and four covers, as the second CD from "Jason Elmore & Hoodoo Witch entitled "Tell You What". This CD, a Blues Blast Music Award nominee, is a blend of blues and rock with some elements of jazz, that clearly demonstrates the prowess of these talented musicians.

The disc opens with "Sharecropper Shuffle" an upbeat instrumental that evokes the spirit of one of the great guitarist of the past, Freddy King. Next is "Southbound" a rocking vocal with excellent guitar that has Jason singing, "the future is so much clearer, when you leave the past behind". Not only is the music great but you also receive words of wisdom.

"Cold Lonely Dawn" is blues at its best, a traditional ballad with Jason begging his woman to treat him right, a superb guitar solo, all complimented by the addition of keys and horns. "Dirt ain't enough", another memorable blues tune, has Jason once again delivering an exceptional performance as a vocalist, guitarist and lyricist. Jason next covers a Rory Gallagher tune "Country Mile", a hard rocker that comes at you like a freight train that is behind schedule. This high energy performance features super slide work from guest guitarist Jim Suhler. Another Elmore original "Good Foot" is a jazzy swing tune followed by a jazzy shuffle "She's Fine", both nicely done by Jason and the boys.

The closer is a cover of William Bell's "You Don't Miss Your Water" highlighted by soulful lap steel slide from Kirby Kelley. Jason covers a lot of ground from blues to rock to jazz and everything in between on this release, but does it well. There are no clunkers on "Tell You What", and is highly recommended, an impressive performance by all.