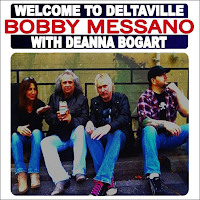 Deltaville is a small town in Virginia, situated on the Chesapeake Bay.  It is an almost surreal spot, with boats floating on the waters of the bay, sea shore styled homes, and small inns and restaurants ready to serve both locals and the occasional weary traveler looking for respite. It is an idyllic setting, a place to come to, get absorbed into, relax and enjoy. And so, too, is this new album from Bobby Messano.  It is a blues and rocking locale where the listener can park themselves, absorb the wondrously fresh sounds and revel in interesting songs offered up that are both new and old.

Joining Messano on this endeavor is his ever-staunch and steady band mate Steve Geller on bass.  Geller is a rock solid bass player who is intense yet subtle, a man who you sometimes don’t notice that he’s there but if he were not things would quickly go askance.  On drums is Mel Watts from the Little River Band, another backline specialist whose approach is professional and top notch. That is the core of Messano and his band: he and Steve and Mel, one of several drummers who support Bobby in his travels.  They alone are formidable and exciting, but adding so much to the mix here is Deanna Bogart.  Her sax and keyboard work along with some vocals are stellar and make this a richer and lusher sounding CD overall.  Ivan Neville also appears on B-3 and clavinette as does Tracy Nelson on a duet and backing vocals.  What a superb cast of characters!

Messano begins the set with a gutsy version of Otis Rush’s “All You Love I Miss Lovin’”.  His guitar really stings and Bogart’s sax wails like a banshee as he and the band set the stage for a great set of tunes.  I’ve seen Bobby open recent shows with this cut, but the addition of Bogart is exceptional and the overall mix is superb.  Up second is “The Invisible Man,” where Messano’s sings of the hidden hell of being visibly seen yet remain unnoticed.  It is a mid tempo, driving rock tune with huge guitar and organ lines that solidify the cut.  One can almost feel the strings bend on Messano’s guitar here.  He transitions into the title cut, a ballad that Messano floats vocally through with backing vocals echoing the welcome to the near-mystical place of Deltaville.  The song drifts with purpose over waves of comforting sounds and builds to a big finish with a nice slide backing the vocals.

Messano follows with the bouncy reggae and calypso sounding “That’s the Way of the World.”  The keyboards add all sorts of levels of support, but it is Bogart’s sax that dirties things up nicely.  Messano and she go back and forth a bit on guitar and sax and the gang background vocals just exude musicians having a good time together.  “My Crazy Dreams” is a slow, bluesy number where Messano laments about all the things that have happened in life and how we must go to a safer place on occasion to escape with those crazy dreams that never let you down.  Messano offers up a poignant guitar solo and the piano fills in sweetly.  In “I Ain’t Got Diddley” Bobby pays a little homage with a driving Bo Diddley beat as he tells his former love just what the title says.  The band sneaks into the cover “The Way You Do the Things You Do” as Bogart gently tinkles out a little intro and then Messano sticks it in your face as he swings through this classic with great aplomb.  Bogart’s dubs in as a horn section and the song just rollicks and rolls along coolly.  Messano testifies to us on his guitar as we get schooled by this master, and then Bogart changes keys and gives us another nice solo on sax to add to the charm.

The last of the original cuts is “Lonely Town,” a jived up and swinging tune where Watts’ percussion work adds so much subtlety and Bogart haunts us on the sax.  Messano sings and plays poignantly and shows us he is also a superb songwriter with this and his other original songs.  Santo and Johnny’s “Sleepwalk” is offered up next as Messano breathes life into this old classic.  Bogart on piano adds richness and depth, but the star of the show is Messano’s fretwork.  What a show he puts on here along with the rest of band, making it sound larger than life.  Messano builds up and attacks the strings of his guitar and leaves us breathless, they takes it back down a few notches to allow us to recover.  Outstanding stuff, but then Messano really gives us a treat with the Traffic cover.  Bobby pays tribute to the man he traveled with and covers this Winwood number as few, if any, could.  “The Low Spark of High Heeled Boys” (as those of you in Bobby’s age group and mine who love music from our youth know very well) is from the Traffic album of the same name.  Stevie Winwood wrote and played this song with his band Traffic and made it a unique remembrance from our teens, showing brilliance and musicianship at levels we were in awe of then and remain in awe of today.  Messano delivers this to us with power and depth, transitioning from one part to another seamlessly.  Bogart on sax and keys is other-worldly; she delivers a unique and wonderful performance.  Messano’s vocals can get up there like Winwood could and sells this to us.  The up and down of emotions is amazing.  Messano builds it up, Bogart takes us down and the team of musicians goes back and forth with this in a cacophony of musical emotions.  Geller’s bass is sublime and primal, adding continuity and flow to this superb cover; he plays a really deep monster bass line here.  Jazz, rock, blues and whatever else is mixed in there blend to make this final cut a song to remember!

This is easily Messano’s best effort to date.  His last CD was super and he’s raised the bar even higher with this album.  Go look for the CD with the take-off of the old John Mayall and the Bluesbreakers album cover with Eric Clapton, buy it, spin it and relish it- you will not go wrong.  I most highly recommend this!