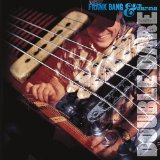 Frank Bang (Frank Blinkal) has quite a story.  A encounter in San Diego while working at the Hard Rock Café with Stevie Ray Vaughan put him on the path back home to Chicago to reconnect to the blues.  He got a doorman job at Legends, which eventually got him a shot on stage.   Buddy was impressed and later he joined Buddy’s touring band as second guitarist.  In 2004 he put out his own CD, “Frank Bang Alive One”.  Three more discs followed with the last one in 2007.  There was a hiatus until now, and Frank is back!
This is not traditional blues, but has a blues base to it.  Frank does call his music Rock Americana.  There are southern rock influences also.  The band is made up of Frank Bang on guitar,  Bobby Spelbring on drums, and Ryan Fitzgerald on bass.

This CD blasts off on the opening cut “Double Dare”  with a hard loud blast of a track.  It is followed by “Burnin’ Up in the Wind” a slide guitar centered song with some sharp harmonica by Russ Green.   Up next is “Lose Control”, with a very funky bass line and some wild sax by Greg Ward.   “God Fearin’ Man” has a strong southern rock/blues feel.  The same is true for “Wonder Woman” with it’s strong guitar riffs and Russ Green harmonica playing.

The disc slows way down with the acoustic “This Is What It’s All About”.  It is quite a contrast to the first 5 tracks.  The next song “All’s Well” brings the heat back up with a blues rocker song that has some nice drumming in it.  “My Own Country Way” is another acoustic country/blues song.  There is some fine picking here.  The following song “Eighteen Wheels of Hell” is a definite southern rock song.  Vocals remind you of Charlie Daniels, good stuff.  The next to last cut “All I Need” kind of flounders a bit.  It’s not bad, but maybe my least favorite track on the CD.  The CD closes with “Mattie’s Girl” another acoustic number.  I thought they might close with a rocking number,  but this is an OK track.

I liked this CD more than I thought I might.  It presents a wide array of music, with good playing on the tracks.  Some cuts may not appeal to everyone, but everyone should find something to like here.  Frank is touring, so check him out!