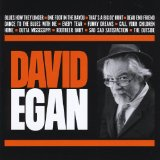 David Egan grew up in a musical family in Shreveport, LA.  His background is diverse playing in A-Train, Filé and Lil’ Band O’ Gold.  His material has been covered by Joe Cocker, John Mayall, Percy Sledge, Irma Thomas, and Johnny Adams.  “Sing It” performed by Marcia Ball and Irma Thomas was nominated for a Grammy award in Best Contemporary Blues category.

David has 2 precious solo discs 2003 – “Twenty Years Of Trouble”, and 2008’s “You Don’t Know Your Mind”.  I have seen him perform at Jazzfest in New Orleans as a solo and with Lil’ Band O’ Gold.  If you enjoy the older Ben Sidran and Mose Allison, you will find David Egan in the same vein with a bit of Louisiana spice tossed in.  Egan wrote all the songs on this CD.

My expectations were high for this disc, and David did not disappoint with it.  He sings and plays piano and organ on all cuts.  Mike Sipos (A-Train, Johnny J & the Hitmen) joins on drums and Ron Eoff (Cate Brothers, The Band) on Bass for the entire 12 cuts.  Main guests include Dickie Landry on baritone, Buddy Flett & Lil’ Buck Senegal on guitars and Mike Dillon on congas and percussion.

“That’s A Big Ol’ Hurt” kicks it off with plenty of mid tempo piano and greasy baritone by Dickie Landry.  I’d love to see this one jammed out live.  “Call Your Children Home” brings the tempo up with some great guitar licks and percussion from Mike Dillon.  Next up is “Outta Mississippi”.  This has some great Allman Brothers type tempo and riffs.  The 4th cut is “Blues How They Linger”.  David gets on the keys and plays a slow sultry blues number

“Dance To The Blues With Me” is next.  It would be a great cover for Irma Thomas as a mid tempo vocal.   “One Foot In The Bayou” follows rocks along with some great piano and clever lyrics.  Mose Allison could have written “The Outside”  This is a slow sliding piano number with lots of fine lyrics.  “Funky Dreams”  picks up the pace and will get everyone’s backfield in motion.  Little Bick and Buddy Flett trade some nice guitar on this one, reminiscing Mem Shannon a bit.

Roddie Romero has backup vocals on “Dead End Friend”.  It’s uptempo, but not quite what I might expect after hearing the earlier cuts on the disc.  “Sad Sad Satisfaction returns to the Mose Allison vein slower piano number.  Some fine jazzy drum accompanies this one by Mike Sipos.  Up next is Rootbeer Baby.  Egan slides into a Big Easy groove about some great lyrical double entendres.  This one could be from the golden age of New Orleans R&B.  “Every Tear” closes out the disc with a slow swamp pop cut.  Nice vocals and great emotional lyrics make this a nice closer of the disc.

This disc further reveals Davis Egan’s talents.  It should make the Offbeat Top 30 at year end.  Pick this one up, and if you get a chance to see David Egan DO IT!!