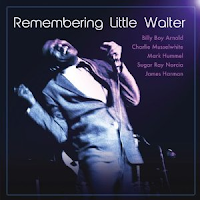 When harmonica players are the subject of talk in the blues world, Little Walter Jacobs is the definitive example of the most outstanding and influential player ever. His style of playing and the amplification of the instrument changed the stage forever for upcoming harmonica players. Little Walter will always be known for his harp playing, blues singer quality and song writing ability as well as the joy he showed in playing music. Blind Pig Records, “Remembering Little Walter” is a powerful tribute to his talent. This recording , produced by Mark Hummel, features Billy Boy Arnold, Charlie Musselwhite, Sugar Ray Norcia, James Harman and Hummel showcasing tunes of and associated with Little Walter. These fine musicians are a premiere list of harp players and are joined on stage with Little Charlie Baty and Nathan James on guitars, June Core playing drums and RW Grigsby on standup bass. This group has to be just a big force of blues power to have on one stage on the same night. This CD was recorded live at Anthology in San Diego.
Mark Hummel opens the set with “I Got To Go”. This upbeat tune is a fine example of Jacob's harp style as Mark charges along with solid tone filled solos and trills. Hid rhythm playing is also added to this vocal take on this great blues tune. Check out RW Grisby's bass line also on this song. This is a great way to start out “Remembering Little Walter”. For slow blues Hummel jumps in with his take of “Blue Light”. Mark gives up a bunch of those long, heart felt bluesy sustained notes that really grab the ears and feels them with the blues emotion. The rest of the band also holds up their end of the music with great bass, guitar and drum work. This is really a tough song to beat and is a real tribute to Little Walter's style of presenting the blues.
What would a tribute to Little Walter be without the input from Charlie Musselwhite?  Charlie has probably the most recognized harp style or sound of harmonica players. If you hear him, you will say “that's Musselwhite”. Having a long relationship with Walter had to be a big influence on Charlie's musical ability and the molding his style of playing. This is all good. Musselwhite does a great job on “Just A Feeling” as he plays his harp with that deep toned, slow, purposeful style of presenting blue that get a hold of you and suck you into the mood of it. Take a long listen as he sings the lyrics on this track also.

James Harman does his magic on harp and vocals with his rendition of “It's Too Late Brother” and “Crazy Mixed Up World”. This man can do no wrong blowing harp. Also included on the recording is Billy Boy Arnold with his great style of playing on “You're So Fine” and “Can't Hold On Much Longer”. Sugar Ray Norcia joins the mix of things with his version of”Mean Old World” and “Up The Line”. This is good stuff. It is a tough job to give praise to all the talented musicians and singers when doing a various artist recording review. I can not say enough in this space about the quality of all guys involved with this tribute to Little Walter Jacobs. The final track of the CD tells the whole story with a rousing arrangement of “My Babe”. Each player take their turn on harp and vocals as they challenge each other creatively. What a great way to end “Remembering Little Walter”.

If you are or are not a harmonica fan check this recording out and you may become one. Mark Hummel  has done his homework by presenting this type of tribute to the legendary Little Walter. He has chosen the very best harp players to be involved on this project also. The album cover picture shows how Jacobs enjoyed playing the blues. This CD is a great example of how blues will stay alive because of past players and present players of the blues doing so with true emotion and feelings. “Remembering Little Walter” is a keeper!.