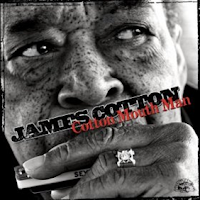 
A James Cotton biography built into a music CD?  In a way this sounds kind of odd and fluky, but the reality of it is that they kind of pull it off.   Tom Hambridge is the noveaux wizard of the blues world.  He had a hand in writing all but one of the dozen cuts on this album and plays drums on all but one cut (he sits out of his songs).  The album also has an assortment of visiting stars from the blues world, which I find often makes for a disjointed set of tunes, yet they for the most part retain the theme and consistency of sound here.  So once you get past all that and just sit, listen and enjoy, the CD is really a lot of fun with some good highlights.


Cotton is prominent throughout.  They have his harp amped up well (maybe even too well in a few spots) and he really delivers fine performances.  His harp work is as good as ever; dirty, bluesy, and delivered with great musical abandon.  He even sings one song here!  Joining Cotton on vocals when one of the visiting stars is not singing is Darrell Nulisch.  He hails from Texas and was originally part of Anson Funderburgh’s Rockets and then Ronnie Earl’s Broadcasters before going solo in 1990.  Rob McNelley is on guitar for the majority og the CD and Glen Worf pretty much parallels him on bass.  Tom Holland (guitar) and Noel Neal (bass) are inserted when McNelley and Worf are not.  Chuck Leavell is on piano,  keys and organ and is a really nice accompanist to the mix.


The title track starts things off.  Joe Bonamassa is featured on guitar and Nulisch is on vocals, but Cotton is king here.  He blows some mean harp and the guys on the mixing board let you know it.  Bonamassa offers up a tasteful solo which adds nicely to the cause and is not overdone.  It’s a nice start for sure!  Greg Allman sings on “Midnight Train” and we get Cotton doing train sounds and Chuck Leavell on the Wurlitzer piano.  Allman is almost reserved here, taking it easy and not going gritty and dirty on his vocals.  Holland tickles the stings cool-ly and Leveall tinkles the keys prettily but Cotton is again king as the harp is featured front and center on the solos.  “Mississippi Mud” brings Keb Mo into the mix and he delivers well vocally in his easy going and smooth style of singing.  Leveall’s piano is more of a feature here and he fills out the song well.  Cotton’s solos are not as loudly mixed and I think that is a better approach here.  In “He Was There” we learn of all the places James was at and Nulisch and Cotton deliver the goods here.  Leavell is good I support again, too.


“Something For Me” brings us Warren Haynes on vocals and guitar.  Singing into the harp mike to open, Haynes is down home and effective; he them cuts in for the majority of the song and delivers a great performance.  His guitar is also mean and Cotton is back out front on the harp in a big way.  “Wrapped Around My Heart” has Ruthie Foster on vocals and it is a beautiful slow blues where she and Cotton “sing” to each other.  Foster’s vocals are earthy and deep and Cotton replies on harp with equal intensity.  Nelly and Leavell also do some nice response to Ruthie’s calls here, too.  “Saint on Sunday” is a cool number about the woman who is a saint on Sundays but a devil on Mondays.  Nulisch delivers a fine performance as does Cotton as the band lays out a nice groove.  Delbert McClinton makes an appearance on “Hard Sometimes” and gives a great effort; he and Cotton team up sweetly and Leavell adds a little honky tonk touch on keys that compliments Delbert well.

“Young Bold Women” and “Bird Nest on the Ground” are back to back and the artists are back to the core band.  The former has an almost reggae aspect to it while the latter is more boogie woogie.  Nulisch and Cotton are a good team.  Keb Mo returns with “Wasn’t My Time to Go,” featuring Worf’s big bass and the story of Cotton’s brushes with death.  The core band does “The Blues Is Good for You”  where Cotton is unrestrained and Nulisch matter of factly states Cotton’s orders from the doctor, AKA what the title says.  The final cut is Colin Linden on acoustic guitar and Cotton on vocals and harp.  It is a beautiful and touching piece.  Cotton gasps out the vocals touchingly as he sings of his mentors and career.  Very impressive, very old school and very well done.


Ok, so once you get past the fact that all these songs are snippets of Cotton’s life and that the biographical nature sometimes makes for great songs and sometimes pushes the lyrics you then have 13 cuts with damn good deliveries/performances.  I think the harp at times it too loud in places but other than that this is a marvelous new album.  Frankly, I thought the biographical approach was kind of cool.  Cotton can still blow some mean harp, the guests are respectful and become part of the over band and are not looking to showcase their talents and the core band members are excellent.  This is a nice tribute to a man who is getting up in years but is still a giant in the blues world.  His 2010 Alligator release of that name (Giant) was an outstanding CD and so is this one!  Orphaned at an early age and raised by Rice Miller (Sonny Boy Williamson), we now have a biography of this humble man set to music that gives us some insights to his life while listening to some outstanding new music.  Well done!