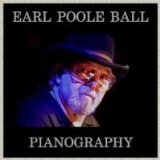 While you may not recognize his name, chances are that many of you have heard Earl Poole Ball playing piano at some point over the last forty-five years. In addition to being a noted session player for artists like Gram Parsons, Buck Owens and Merle Haggard, Ball was a member of the Johnny Cash band for two decades. He also played on the memorable Sweethearts of the Rodeo album by The Byrds. His first solo recording celebrates his career in the country music genre.

Seven tracks showcase Ball on lead vocals and a Yamaha grand piano leading a band that includes Casper Rawls on various guitars, Dony Wynn on drums & percussion, and Glenn Fukunaga on electric bass. The title cut finds Ball tracing the arc of his life and career accompanied by twangy guitar licks that create the proper mood for this bar-room tearjerker. Another original, “The Real Me”, celebrates life while “Say You Love Me” is one of three tunes Ball co-wrote with the great Cajun musician Jo-El Sonnier. It takes you to honky-tonk heaven with Ball tinkling the ivories around guest Cindy Cashdollar’s splendid lap steel guitar work while Jon Blondell’s tuba fattens up the bottom end.

“Standing at the End of the World”, another of the duo’s tunes, finds Ball trying to get over his broken heart with Cashdollar on steel guitar. The pace picks up on “Sing It Boy”, a number that surely would fill the honky-tonk hardwood dance floors. It features one of Ball’s strongest vocals. The band shifts gears on “Something’s Gonna Get Us All”, creating a gloomy landscape for Ball’s examination of inevitability of death.

The excitement level picks considerably on four live performances from the 2010 Johnny Cash Bash at Emo’s in Austin, Texas. Ball sounds right at home on rockin’ versions of “Big River” and Roy Orbison’s “Down the Line” with Tom Lewis on drums and Kevin Smith on upright bass forming a potent rhythm section. The leader pounds his piano on the latter number while Rawls manages to match the intensity on his guitar. Lisa Mills’ gospel-influenced voice forms a strong vocal duet with Ball on “Will the Circle be Unbroken” before the group finishes things off by ripping through “Mean Woman Blues” with some red-hot guitar licks from Rawls before Ball slips in some piano playing worthy of Jerry Lee Lewis.

The last two tracks have historical significance with “Second and San Antone” dating back to session Ball cut in 1967 at a Hollywood studio. He is on fire, singing with abandon and hammering his piano, while Dick Chandler’s taut guitar playing lights things up. “Flowers on Papa’s Grave” is an original Ball recorded in 1977. He wrote it after a cemetery visit with some of his relatives. It has a strong country gospel feel highlighted by Ball’s reverent singing.

This is not a traditional blues record. In fact, you will only find a few overt blues influences. It is, however, a solid recording in the traditional country music vein, which once was considered the “blues music” for the rural white population. Given his history, you’d expect Earl Poole Ball to have this music down pat – and he doesn’t disappoint. Definitely one to check out if you are looking for a change of pace or want to revisit the days when country music really was country!