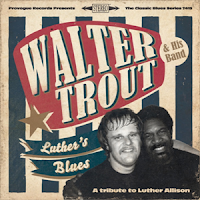 Luther Allison produced 20 albums during his much too short lifetime.  In 1986 at the Montreaux Jazz festival in Switzerland he and Walter Trout first met and the influence by Luther on Walter  from that time until Luther’s death in 1997 was huge.  Trout had never done a tribute album and at first was able to reduce potential songs for this project down to about 40.  After much deliberation, the list shrank to the eleven we have here, with one spoken track and one original track added to close out the tribute.

The album starts off with the driving “I’m Back” which really is a vibrant and rousing selection and Trout’s performance holds nothing back.  One of my all time favorites is “Cherry Red Wine.”  This is a visceral and emotion filled song and Walter really groans and growls this out as he blasts out riff after riff in spectacular fashion.  “Chicago” Is another cut that will fascinate the listener and hopefully drive them to listen to Luther’s music.  “Just As I Am” is a beautiful and moving cut with Walter “testifying” to us as the organ plays behind him.  “Freedom” is perhaps the cut that everyone will remember most as it talks about the drive for freedom across the globe.  Trout is passionate in his delivery here and it is a memorable performance.  While these big and popular cuts deservedly must be commented on, there is a lot more here.  “Bad Love” offers up one of the biggest and baddest guitar solos of the year and perhaps even the decade. “Low Down and Dirty” rocks out with the best of them.  Trout finishes up with “When Luther Played the Blues” and it’s a dandy.  The guitar work is impeccable, the song is biographical yet cool and it is just a great cut and way to close out the album.  There is much to enjoy here!

Trout is not trying to outdo Luther nor is he giving us Luther done in a new way.  He serves this up as a tribute to a man whose life was cut short and whose work deserves notice and appreciation.  He has done a fantastic job here in giving us more than a taste for Allison’s works.  Luther’s fans will get the love and admiration expressed here as Trout delivers song after song in loving tribute.  Those less familiar with Luther will get exposed to Allison’s exceptional song book and will want to delve more into his works.  This is an outstanding album by an artist who can play the blues and rock with the best of them.  Highly recommended!