Stepchild Of The Blues reviewed by Diane Mandell 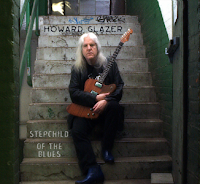 Released on September 17, 2013 on Lazy Brothers Records, "Stepchild Of The Blues" is comprised of all original tracks self-engineered and produced by Glazer.  The well-known Detroit-based song writer, vocalist and guitarist is frequently featured with another Detroit bluesman, Harmonica Shah, who returns the favor with his harp licks on tracks 3 and 9.

Glazer has played blues for over 20 years with the likes of Johnny Winter, Savoy Brown, BB King and David "Honeyboy" Edwards, to name a few.  He has toured in the US, Europe, Japan and Canada.  He was nominated for both the 2013 Downbeat Critics Choice Award for Best Rising Star-Guitarist and Best Blues Artist.

My favorite tracks are the two with Harmonica Shah, "Gas Pump Blues" and "Hurtful Feeling".  I also really liked "Liquor Store Legend" but the rest of the tracks hold their own, too.  I give it an enthusiastic thumbs up especially for those who prefer their blues more on the "traditional" blues club side.