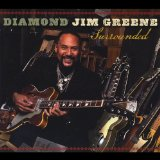 Chicago’s own Diamond Jim Greene arrives with his 5th recording project.  He can be seen around Chicago on a regular basis as an acoustic performer using a National Steel guitar or a 12 string.  Diamond Jim also tours Europe and makes festival appearances.  He is supported on this disc by a bevy of varied musicians including Joe Filisko (harmonica) and Steve Eisen (sax). He wrote or co-wrote 4 of the 14 tracks.
The CD opens with “Shake ‘Em On Down” with Joe Filisko blowing harp and a punched up feel to the Tommy McClennan tune.  A fine opening cut.  A Co-written number with Rick Barnes “Right Now” is a fine cut with a bit of The Band feel to it.  Nice piano work by Daryl Coutts and a fine horn section support the strong cut.  On cut #3, a self penned song, Jim shows off his vocals and a nice sax solo by Steve Eisen carries the tune along.   “Ophelia” by The Band fits right into the groove of the CD.   Again Steve Eisen on sax does a fine solo.  On the 5th cut the traditional song “Big Leg Woman” gets jazzed up a bit.  It fits to the flow of the CD, but maybe fits better as an acoustic piece to me.
The next grouping on this CD features Duke Ellington’s “Don’t Get Around Much Anymore”.  A Great song but not sure the arrangement adds much to this historical song.  The horn solos are pretty nice though.  On cut 7, the CD reaches back to the traditional “Screamin’ and Cryin’”.  I like this song and it’s more acoustic arrangement.  I really enjoyed the “Take Time To Know Her” cut.  It put a bit of picking into this great soul classic.  Nicely done!  Cut 9 “I Gotta Quit You” is a self penned song that keeps your foot tappin’ and continues the disc’s flow.  “Prison Blues” is a nice acoustic cut with Flisko’s harp giving it a haunting feel.

“Talk That Talk” is the 11th cut, and is self penned by Greene. I like the horn support on this one.  It would be interesting to hear this as more of a ballad.  Up next is “Wide River To Cross” a Buddy and Julie Miller penned acoustic song.  The National guitar and some soft accordion support the strong vocals by Greene.  Song #13 is Green’s version of Robert Johnson’s “Crossroads”.  It is OK, but do we need another version of this song?  The CD closes with the “Golden Bird” by Happy Traum/Artie Traum.  It has the feel of the Levon Helm version.  A nice ending to this fine CD.

Enjoy this fine CD.  Diamond Jim has crafted a fine piece of blues and Americana music.  Catch him live if you can and spin this CD.