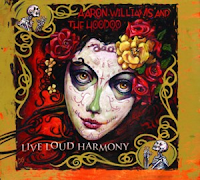 Aaron Williams and the Hoodoo are a great young trio of musicians from Madison and we have reviewed their first two studio albums here in our newsletter.  Recorded live in the Harmony Bar in downtown Madison, the band feeds off the lively crowd and delivers an electrifying performance.

Williams leads the band, sings and plays the guitar.  Eric Shackelford is the drummer and a vocalist and Z is the bass player and also does vocals.  These live songs are mostly originals and are predominantly featured on their recordings.  The live versions have a great feeling to them, plus they have a few songs that are not on their CDs!

They open with “Boom Boom,” a real crowd pleaser.  Willams is wailing on a cigar box guitar, Shack is beating the hell out of his drums and Z maintains a frenetic throbbing sound on his bass.  It whips the crowd into a frenzy and the album listener is not far behind. They cover “Sick and Tired” next, one of their staple songs.  Williams does this Elvis style and the band just delivers the goods on this great boogie woogie cut.  “Supper at Night” is new to their recordings.  Z does the vocals here for a change of pace and Williams fills in nicely on the guitar solos.”Ramblin’” is another newly recorded song for them.  It’s a fast paced and frenetically hot number with Williams in the lead.  They slow things down and follow that with “My Turn” off their first CD.  Williams croons to the crowd and they sit listening intently.  Aaron breaks into a very cool and intense solo about half way through that is outstanding.

“Uncle” Shack continues with another cut from the 10:49 album, “Red Headed Woman,” a song abut one of the most dangerous predatory species in Wisconsin.  It’s a lot of fun and Williams adds a slide solo to spice it up more!  “No Time for Love” is from the newer CD It Ain’t Easy and the boys tell some girl “they have no time for love but they got a little  time for you.”  “It Is What It Is”  has Z singing this one from their first CD.  “Daddy” Shack is called out as Williams then follows with the Doors hit “Roadhouse Blues” Another slide guitar solo and a driving beat make this one very cool.  They finish with the title cut from their latest CD and then turn it into a medley with the “Star Spangled Banner” and “Gypsy.”  “It Ain’t Easy” itself is a great song with a thoughtfully written and played big time stratospheric solo and then they go into the National Anthem a la a little bit Hendrix and a little bit of Aaron Williams.  Williams introduces the band and then they break into “Gypsy,” a big time instrumental, to close things out.  Fuzzy, distorted and psychedelic, it is a very sweet ending for a super album!

If you are new to these guys then this will serve as a great primer.  If you’ve seen them live then this will serve as a sampling of the fantastic shows they put on.  If you’ve only heard them on their studio CD’s you will hear what you are missing in not attending their live shows.  It is high energy rollicking good time that every blues fan will enjoy.  I love these guys and this CD– highly recommended!