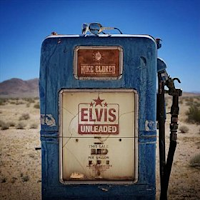 The date is January 8, 1935 in a two-room house in Tupelo, Mississippi. If only the world knew what was ahead, when "King of Rock 'N' Roll" arrived, and the impact he would have on the entertainment industry. He would change American popular music forever. Known the world over as Elvis Aaron Presley, he was highly regarded as one of the most important figures of twentieth century popular culture.  With guitarist Scotty Moore and bassist Bill Black by his side, Elvis set the world upside down with rockabilly, an up-tempo, backbeat-driven blend of country and rhythm and blues. Their career started in 1954, when RCA Victor acquired their contract in a deal arranged by Colonel Tom Parker, who went on to manage Elvis for over two decades. Elvis had his first number one release in 1956 with "Heartbreak Hotel," the same year as his film debut in Love Me Tender.

West Coast guitar slinger Mike Eldred and his band consisting of John Bazz on bass and Jerry Angel on drums decided to revive the music that America grew up with on his third album entitled Elvis Unleaded on Rip Cat Records. With special guests Gene Taylor on Piano, Jerry Donato on tenor sax, Scott Yandell on trumpet, and The JOBS Quartet, they board that Rock and Roll train bound for Memphis. This is a follow-up to Mike's recent blues CD "61 and 49," the album that Scotty Moore plays guitar on as a guest. Mike covers 20 classics from Elvis's first number one hit "Heartbreak Hotel," to more obscure movie tunes like "Little Egypt." Mike does a spectacular job of applying his own signature to a voice that is so familiar to so many generations of music fans around the world. Deciding to even attempt a magnanimous undertaking of this magnitude, shows not only his versatility as an artist, but also the ability to make all 20 selections his own interpretation of the late great rock legend. In recording this collection, Mike Eldred truly puts the "ROCK" in Rock and Roll. His version of the opening tune "Burning Love" is worth the price of CD. It rocks from NY to LA with a driving beat and vocals to match. He follows up with the obscure Elvis tune "I Fell So Bad," with rockabilly guitar like you have never heard. He can only top that with a dynamite version of "Rip It Up," followed with the smoothest rendition of "Don't" since Elvis himself. "Bossa Nova Baby," "Love Me," and "You're So Square" are tunes not often included on Elvis collections. "Lawdy, Miss Clawdy" and "Treat Me Nice" will bring you to the midpoint of collection. The second half opens as spectacular as the opening tune with "Girls, Girls, Girls" from the movie with the same title. You will especially enjoy Mike's vocals and guitar licks on the 1957 classic "Jailhouse Rock." You will be dazzled with the 1962 hit "She's Not You" and "Long Tall Sally," the 1956 rock and roll song written by Robert "Bumps" Blackwell, Enotris Johnson, and Richard Penniman. Next on the list is the blues classic "Big Boss Man" written by Luther Dixon and Al Smith in 1960 and released by Elvis in 1967. The 1957 recording of "One Night Of Sin" is next on Mike's list of favorites. Saxophone and guitar solos will make your "head spin" on the 1963 release of "Witchcraft." Mike pulls out all the stops on the remaining three Elvis classics "Heartbreak Hotel," "King Creole," and the 1975 "T-R-O-U-B-L-E," by bringing Gene Taylor center stage on piano.

If you are an Elvis fan, this Mike Eldred release Elvis Unleaded will never remain on you shelf for any length of time. If you are not familiar with Elvis Presley, you will soon become a fan after hearing this special Elvis collection recorded Mike Eldred style. What will be next for Mike Eldred remains to be seen.