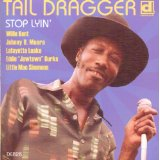 Tail Dragger’s (James Yancey Jones) first recording session has been hidden away for over thirty years. Now Delmark Records has just released this piece of 1980’s Chicago blues history on CD. “Stop Lyin’” features nine of James Jones tunes plus a special sixteen minute track called “Tail’s Tale”. His story on this one is funny, serious as well as informative while he tells us the story about himself and blues players of Chicago’s West side and the clubs they played in. We should all take the time to listen to “Tail’s Tale” several times. ”Stop Lyin’” features Tail Dragger on vocals, lyrics and storytelling, Johnny B. Moore with lead guitar, Willie Kent on bass and Larry Taylor playing drums. Sharing harp duty are Eddie “Jewtown” Burks and Little Mack Simmons. Lafayette Leake adds some awesome piano on two tunes while Jesse Lee Williams puts his guitar playing into the mix of the music. Tail Dragger has surrounded his talent with a whole bunch more blues talent.

Tail Dragger took his time starting his own singing career by honing his vocals and persona sitting in with numerous blues bands. Notably his biggest influence was none other than the legendary  Howlin' Wolf. Dragger picked up and expanded on  the antics of the Wolf. Getting down on the floor, using his strong growling vocals, creating strong lyrics and working the women in the crowd creates one heck of a show from Tail Dragger. You have to see him in action on stage to see that this man is truly an icon in the blues world.
The opening tune for “Stop Lyin’” is “So Ezee” which was released along with “My Head Is Bald” as a 45 in the 80’s. This track features Little Mack Simmons with his solid Chicago style harmonica playing and Lafayette Leake plunking away with some great piano as Tail Dragger sings and talks the story of his lyrics. “Where Did You Go” has an unmistakable groove from “Smokestack Lightning” and Wolf type antics with Tail Dragger lyrics. Howlin’ Wolf may have been right when he stated that, “One day this boy gonna take my place.” ”Aint Gonna Cry No Mo” take us on the slow blues route with Johnny B. Moore riffs that tear at your ear with the blues as Eddie “Jewtown” Burks adds his strong blues harp playing into the mix. Also included on this fine recording are upbeat shuffles “Stop Lyin’” and “Don’t You Want A Good Man”.
“Stop Lyin’” is a solid and  important record of Chicago blues history that should not have been hidden away for thirty years. A Tail Dragger does not come along every day. I did get to meet and sit down to talk to him a few weeks ago which was very enjoyable and informative. He is truly a unique person in blues history. He stated that blues players in other countries appreciate blues artist more than here. This is not good because we need to keep the blues alive for new fans. Thanks again to Delmark Records for being dedicated to keeping the blues  alive and presenting great blues artist to all us fans.