Down On My Luck reviewed by Rick Davis 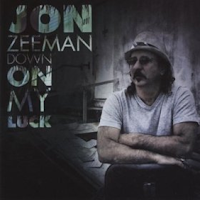 Down On My Luck
Jon Zeeman
Membrane Records
http://www.jonzeeman.com
11 Tracks

Jon Zeeman is not a stranger to the music world particularly to the blues. If his name does not sound familiar, you have seen and heard him record and perform with the Allman Brothers Band, Susan Tedeschi, Janis Ian, The Burns Sisters Band, and Chris Spedding.  At an early age 8, Jon became infatuated with any type of guitar equipment and was influenced by artists like, Jimi Hendrix, Eric Clapton, The Beatles, B.B. King, The Rolling Stones, Johnny Winter, B.B. King.

He decided at the age of 13 to make music his career, starting by studying classical piano.  Jon spent two years studying music at Ithaca College in New York before moving to New York City where he began producing, writing music, doing session work, and working in his "Studio Z." From there he went to Scandinavia to record and perform with various groups. By the 90's, Jon started to perform his own music, releasing his highly acclaimed debut album Still Life in Europe in 2003. It was followed by his second album Zeeland in 2008.

His aggressive  jazz-blues-funk-fusion guitar style is created with his most utilized guitars that include a Sadowsky and a '63 Brown Deluxe, creating his own unique sound with amp distortion. He has really developed as a blues/rock guitar player since starting guitar in 1969. He guitar handling expertise is quite prevalent in his latest release Down On My Luck, where he also features his daughter Zoe on base. Also on bass is Phil McArthur, with George Lilly on drums, and Tom Regis sharing keyboard assignments with Bob Taylor. 2013 marks a new direction for Jon with his singing debut included on the list of 10 new original tracks. The only cover song is Johnny Winter's "I love Everybody," a tune Jon handles with ease, making it his own. With this new release, he seems to be moving away from the jazz/funk direction that can be heard on his earlier albums and more into the blues/rock style. The CD opens with an original Texas style  blues tune titled "You're Right, I'm Wrong," with Jon as the driving force on guitar and vocals. The title track "Down On My Luck" is a powerful, slow, shotgun blues number. "Hangman's Bridge" is an explosive blues rock tune similar in style to a Walter Trout style. "Waitin For The Storm" is one of most soulful blues tunes on the album. "I Got News" features Jon Zeeman's vocals as much as his superb guitar solos. "Money" establishes a very funky rhythm guitar underlying the tune. The pace is picked up with
"Got The Gun," a hard drivin' rock 'n' roll tune similar those by the Fabulous Thunderbirds and Jimmy Vaughan in the 70's. "Can't You See Me" and "So Bad" is a strong parallel to some of Stevie Ray Vaughan's material. The album concludes with "Better Off Dead" displaying once again the talent Jon Zeeman possesses both vocally and instrumentally.

Jon could be one of the most underrated musicians in the blues field today. As difficult and expensive as it is to tour today, Jon is one blues artist every blues fan should have the opportunity to hear live or at the very least on CD. With his skills he, is bound to gain attention world wide in no time.