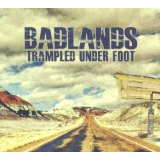 Trampled Under Foot has been steadily climbing the ladder of success since winning the 2008 Blues Foundation’s 24th International Blues Challenge in Memphis. The Kansas City family trio with Nick Schnebelen on guitars and vocals, Danielle Schnebelen on lead vocals and bass, and Kris Schnebelen on drums is taking the blues world by storm. Winning the Blues Challenge was only part of their achievements at the prestigious awards ceremony in Memphis, with Nick winning the Albert King Award for best guitarist.

It was released in their documentary by their mom Lisa that she had a premonition even at a young age, that they were destined for stardom. Their monumental set at the the 2009 Notodden Blues Festival in Norway and the 2011 TUF released Wrong Side of The Blues on the Vizzitone label were very instrumental in increasing their popularity world wide. Their live performances are absolutely spellbinding, captivating audiences where ever they travel. The entire band has matured exponentially, which is evident on their new release Badlands.

The CD was produced by Tony Braunagel who was also featured as a guest artist on drums. All the material was written by Trampled Under Foot, Tony Braunagel, and Chris Schultz with the exception of "It's A Man's World," a tune written by James Brown. Other guest artists include Mike Finnigan on keyboards, Johnny Lee Schell on acoustic guitar, and Lisa Swedelund on background vocals. On their latest album Badlands, they shake the earth with Kris on percussion, Nick on guitar and vocals, and Danielle on bass and vocals. The CD at the time of the review was number 3 on the Top 50 Blues Chart issued by Roots Music Report. It's difficult to get past the opening tune "Bad Bad Feeling," which is one of the strongest tunes on the album. Danielle's piercing, emotional vocals have the power of Etta James and the grit of Koko Taylor. Nick's guitar solos tell the whole story on this tune. "Dark Of The Of The Night" delivers burning guitar and slide guitar solos along with Danielle's explosive vocals, delivering a grim message as she harmonizes with Lisa Swedelund on background vocals. Kris's percussion is the driving force on this tune. Nick takes center stage with both lead guitar and vocals on "Don't Want No Woman." Danielle will mesmerize you will her sultry, bewitching vocals on the slower tune "Mary" featuring Mike Finnigan once again on keyboards. Nick shows a soulful R&B side, much like Marvin Gaye on vocals with the title track "Badlands," giving us an update on the plight of the nation. Get ready for the most emotional, soulful original tracks delivered on the album from Danielle, as she uses her entire vocal range on the blues tune "You Never Really Loved Me." Etta would be proud on this one! Kris and Danielle harmonize well on "Pain In My Mind." She follows up with a message of desperation expressed in "I Didn't Try." Nick's vocals get very soulful and emotional on "Desperate Heart." "Down To The River" is a very roots influenced number, with Nick leading the way on vocals, featuring Johnny Lee Schell on acoustic slide guitar. Danielle continues with her engaging vocals and Mike Finnigan on keyboards covering the original tune "Home to You." On the song "Two Go Down" Danielle will put you into a hypnotic trance with her riveting vocals, featuring a superb performance once again on keyboards. On the James Brown tune "It's A Man's World" the album concludes with a seller performance by Danielle Schnebelen on vocals usually done as a live song in many of their live concerts.

Badlands is the culmination of years of performing from an extraordinary talented family. Their confidence level is obvious after listening to this release. They have grown into seasoned veterans, making their mark in the blues world. Bob and Lisa Schnebelen, both talented themselves, have passed their musical talent on to the next generation, their three children. Hopefully we are going to hear from Trampled Under Foot for many years to come.