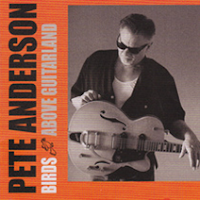 There are a lot of great musicians that most people have never heard or heard about. It is rare to be a musician that most people have heard without realizing who they are listening to. Pete Anderson falls into that category. He is a household name despite the fact that he spent seventeen playing guitar for country superstar Dwight Yoakam, appearing on recordings that sold millions of copies. Anderson also helped with the arrangements and production as the duo brought the traditional twang back to country music.

But Anderson loves blues music, a passion that started when he attended the 1968 Ann Arbor Blues Festival. Hearing Lightnin’ Hopkins, Muddy Waters, and Howlin’ Wolf created an indelible impression on the young musician. Since he left Yoakam’s band, Anderson has been cutting solo records that find him digging deep into the music that once captured his heart.

On his latest, Anderson handles the vocals and guitar parts in addition to playing bass, harmonica and percussion. Michael Murphy plays keyboards. Key bass, strings and adds some harmony vocals. Five different drummers are used with Herman Matthews appearing on five tracks. The horn section is comprised of Lee Thornberg on trumpet, French horn & trombone plus Ron Dzibula on saxophones.

With the horns urging him own, Anderson shows he learned plenty of lessons from T-Bone Walker on the smoldering “I Got Mine”, laying down a magnificent guitar full of deft improvisation. He delivers a gripping confession on “Rock in My Shoe”, his voice full of heartache. The horns ride the loose-limbed rhythm on “36 Hour Day” as Anderson provides another brief glimpse at his prodigious guitar skills. He stretches out a bit on “Talkin’ Bout Lonely”, mixing blue notes with his trademark twang in a solo of mesmerizing beauty.

“Red Sunset Blues” comes across as a Duane Eddy meets the spaghetti western soundtrack with a little surf action thrown in to keep things interesting. And right in the middle is another guitar solo full of exciting twists and turns. Murphy turns an equally interesting jazz-influenced solo on piano. Anderson breaks out the shuffle rhythm on “Outta The Fire”, his voice taking on a harder edge over the blaring horns. His meticulous phrasing is highlighted on the swinging “Talkin’ My Baby Done” as he wrings pure magic out of his instrument. Jake Maeby’s swirling organ chords set a moody tone on “For You”. Anderson twists a haunting solo out of his fretboard over an arrangement with a hint of reggae.

Things shift south to Louisiana on “Empty Everything” with Anderson crying the blues accompanied by Dennis Gurwell on accordion and Steve Nelson on upright bass. The bonus track at the end of the disc is a reprise of “Rock in My Shoe”, this time with the soulful Bekka Bramlett on lead vocal. Her stirring performance points out Anderson’s limits as a singer. But his calling card is his inventive guitar playing. He never overplays or falls victim to the “faster-louder” school of indulgence. He succinct solos avoid clichés in favor of refreshing, playful that leave wanting to hear more. And that is reason enough to check out this little gem!