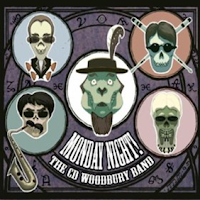 For years, guitarist CD Woodbury has ventured into many genres of music. This included jazz, blues, rock and American roots music. His credentials include playing for two US presidents, foreign officials and also playing Hendrix music for Jimi Hendrix's family. Now with the release of “Monday Night!” he has returned in a solid way back to the blues. This recording is a strong way to show off his guitar, vocal and lyric writing talents. By forming The CD Woodbury Band in 2009, he has surrounded himself with a solid and talented group of musicians, vocalist and song writers. Chris Kliemann joins in on keyboards as Don Montana plays drums and adds vocals on two tracks. Mike Fish adds the standout bass line with Mike Maring adding his talents on saxophone, percussion and lead vocals on two tracks. This band and several of it members have won blues music awards in the Washington state area also.

All of the tunes on “Monday Night” are originals written by The CD Woodbury Band and dive deeply into the blues genre. Woodbury,on guitar, walks us into “These Blues Keeps Me Alive” as the drums of Montana and the sax from Manning follow the shuffle bass line of Mike Fish. This track features all members of the band as Mike Maring adds outstanding sax parts along with keyboard solos by Chris Kliemann. This is a story written by Woodbury about love of a women and not making his mind up as to stay or leave. That is the blues. The whole band does a heck of a performance on this opening track showing us that Woodbury has surrounded himself with a mass of skilled players. “Pawn Shop” brings CD's ability to play those slow heartfelt blues to the front with that feeling that make the blues real. He instills a sense to his playing that makes the guitar seem like it is crying out for attention from our ears. Take a long listen to his stellar solo on this track. Again, every member of this band is given a spot to shine on this song and they do. Woodbury's vocals have a great blues quality to them as he tells the tale of losing his job and going to the pawn shop man for a few dollars to get back on his feet. Here we have another story of the blues.

Ending the the CD is “SauBall Blues” which is a jazzy blues tune that features Maring's sax playing along with some minor sounding guitar soloing from Woodbury. Klieman's keyboard playing carry CD's vocals along nicely on this song also. “SauBall Blues” is an awesome way to end this recording.

With “Monday Night!” Woodbury has taken us on a pleasant road trip into the blues. CD has his own style of guitar playing that releases strong feeling, depth and emotion. The combination of powerful lyrics and the use of all the band members musical talent make “Monday Night!” a very enjoyable and easy to listen to CD. The CD Woodbury Band should be around for a long time is they keep putting out this style of blues for us to hear.