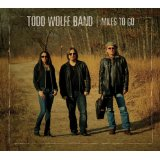 The Todd Wolfe Band is a veteran group from Pennsylvania area.  The current lineup includes Roger Voss on drums and Justine Gardner on bass and Todd Wolfe on guitar.  Todd started in music in 1979 in New York City.  He went to Los Angeles, and at one time was in Sheryl Crow’s band.  His first blues solo outing was in 1999.  This is the 8th album by Todd Wolf Band, plus thy have 1 DVD.  I have heard several of his CDs, but never seen a live performance.  With 10 total tracks, 2 are covers, and the rest are self penned.  The band has a bluesy, Southern, psychedelic sound.

The CD kicks off with “Nuthin’ But You”, a mid tempo blues rock song.  I wish the vocals were punched up a bit.  Up next is a slide acoustic styled number called ”Sunnyvale”.  There is excellent guitar on this cut.  “Locket Full OF Dreams follows with a bluesy, but partial southern rock feel.  It has a nice guitar solo near half way through the song.  One of the covers “Forty Four” (Howlin’ Wolf) brings the is more early blues, with a slower pace.  “Day to Day” has a upbeat country-rock sound, probably influenced from Todd’s time in southern California.

Heading into the 2nd half of the CD we find “I Stand Alone” another acoustic number.  “Stand With Me Baby” is another heavily blues-infused track, with a very different intro, that to me did not help the tune.  “Against the Wall” is the 8th track, and was not one of my favorite tracks.  Vocals seemed buried, and the drum kit seems a bit out of sorts.  “Come What May”, has a reggae vibe to it, and a mid-tempo speed.  I hear a bit of “I Shot The Sherriff” in it.  The CD closes out with “The Inner Light” is a psychedelic/bluesy cover of George Harrison’s song.  It was the B-Side of the single “Lady Madonna.”  I am not sure of this choice, but it is not unpleasant to hear.

This band is on tour.  Try to check them out for the live vibe.  The CD has some good moments, so check it out if you can.  The musicianship and vocals are fine on this respectable disc.