Singing in My Soul reviewed by Mark Thompson 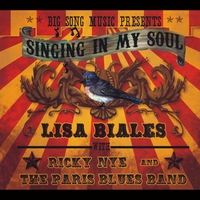 Singing in My Soul


Singer Lisa Biales has been busy over the last seven years, releasing eight recordings including a disc targeting the children's market. She possesses a voice that floats along, caressing your ears with sweet tones that span her impressive vocal range. For her latest release, she offers a wide-ranging batch of tunes that keep the focus squarely on her voice. The backing band is lead by the great boogie piano player Ricky Nye with three Frenchman rounding out the group – Thibaut Chopin on upright bass, Anthony Stelmaszack on guitar and Simon “Shuffle” Boyer on drums.


Biales once played the role of Patsy Cline in a community theater production and you can hear Biales incorporating some of Patsy's phrasing on “Write Me in Care of the Blues” over Nye's driving piano. She downplays the bawdy aspects of Sippie Wallace's “You Got to Know How” with an arrangement that gives her voice plenty of space to resonate with listeners. “A Little Bird Told Me” connects with a hand-clapping rhythm while the band provides hearty backing vocals behind Biales' jubilant singing.


On the ballad “Careless Love”, Nye provides sympathetic support for the singer's immaculate phrasing. Biales is even better on a smoky rendition of “I Only Have Eyes For You”, consistently holding notes to expertly heighten the overall emotional impact. The band lays down a light, swinging beat on “Waiting For the Train to Come In” with Stelmaszack contributing a pleasing solo in a jazzy vein.


Several tracks feature additional musicians including Doug Hamilton on violin, Bill Littleford on guitar, Chris Douglas on upright bass and Brad Meinerding on mandolin. They go old-school blues on a jaunty take of Mississippi John Hurt's “Let the Mermaids Flirt with Me” complete with Biales' honeyed voice and a rolling solo from Nye. The lone original, “Magic Garden”,  finds Biales in a playful mood


that is countered by Hamilton's mournful solo.


The band rocks hard on “Strange Things Happening Every Day”, one of two from the Sister Rosetta Tharpe songbook.. Biales can't match the power of Sister Tharpe's voice, so she is content to let her voice ring out in celebration. The disc closes with a lively version of the title track. Lisa's joyful, radiant performance matched with more of Stelmaszack's spot-on guitar work end the disc on a high note.


I suspect that many of you have never had the pleasure of hearing Lisa Biales. Make sure that you take the time to check this one out, especially if you appreciate someone who understands what it takes to be a strong singer – and has the voice to make it happen. A fine effort worth hearing!