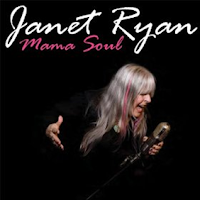 Elementary school music teacher, Janet Ryan, is an East Coast blues vocalist who first developed her love of the blues while living in Chicago during her earlier years.  She sang with Duke Ellington at age 16 and has shared the stage or opened for a host of musicians like James Cotton, Little Ed and the Blues Imperials, Johnny Winter, Dickey Betts, Sugar Ray and the Bluetones, and Magic Dick and J. Geils.  "Mama Soul" has a dozen mostly original numbers as well as Ryan's interpretation of Sippie Wallace's 1966 "Women Be Wise".

Ryan has a huge gutsy voice complemented by talented musicians from her long-time back-up band, The Straight Up Band, and members of the former Texas group, Crosscut.  Tracks range from blues, to gospel, to rock, to jazz.

My favorite tracks are: "He Burned That Bridge" with its boogie piano, slide guitar and trumpet; the jazzy "What I Like Best"; "Take Your Shoes Off", with its soulful, belting vocals, organ and guitar; and "Mr. Misery" with guitar reminiscent of Santana.

This CD was primarily recorded at Audio Dallas Recording Studio in Garland, Texas; two cuts were done at The Tone Zone in Holyoke, Massachusetts.  The album was produced by Jimmy Rogers; Paul Osborn co-produced the Texas material.  This powerfully voiced woman is worth a listen; you will see what Rogers saw in her and why he tracked her down and brought her to Texas!