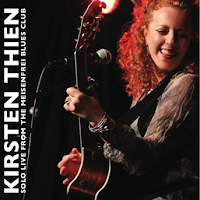 Recorded live at the Meisenfrei Blues Club in Bremen, Germany on October 30, 2012 and released on Screen Door Records on June 4, 2013, this is Thien's first live solo release after three prior studio albums.

Born on an army base in Berlin, Germany and later raised in Maine, Thien grew up singing in a northern Baptist church.  Other early musical influences were Linda Ronstadt, Aretha Franklin.  New Orleans jazz and 1920's women blues singers.  After graduating from Georgetown University School of Business, Thien gave up a career in banking and began her career as a blues artist, settling in New York City.  She has toured the U.S. and Europe and has opened for Dickey Betts, Buddy Guy and Shawn Colvin.

The 15 tracks are an eclectic mix of original and borrowed covers.  Thien's acoustic guitar provides the backdrop for the mostly poignant lyrics carried well by her strong voice.  Although my favorite original cover is "Nobody's Ever Loved Me Like You Do", I liked the borrowed tunes the best, especially Bob Dylan's "It Takes A Lot To Laugh, It Takes A Train To Cry", Ida Cox's "Wild Women Don't Have The Blues", Leon Russell's "I'd Rather Be Blind", Elvin Bishop's "Fooled Around And Fell In Love" and Sippie Wallace's "Women Be Wise".

I was impressed by the courage Thien had to muster to do a solo tour and performance at the 300-seat club and the good fortune to receive the souvenir recording from the club's sound man that she said "...captured this moment in time that already had a special place in my heart and mind."  Worth a listen.