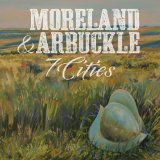 The dynamic Kansas trio of Moreland and Arbuckle is back this time with their July 30, 2013 Telarc release 7 Cities, once again blending blues, delta blues, folk, traditional county, and soul into what could be their most creative project to date. Guitarist Aaron Moreland and vocalist/blues harp player Dustin Arbuckle met originally at an open-mic jam at a club in Wichita, Kansas, in 2001. After the decision to join as a duo, they ended up taking their raw, roots sound to the finals at the 2005 International Blues Competition in Memphis, Tennessee. Moreland and Arbuckle have forged a haunting, raw, heavy-duty blend of Delta blues, folk, rock, traditional country, soul, and numerous other genres.

After their first three self-produced releases, Caney Valley Blues in 2005, Floyd’s Market in 2006, and 1861 in 2008, they decided to take their repertoire of avant-garde music to the American troops in Iraq for a two week tour in the fall of 2008. Along the way in 2006, the duo added a drummer creating a unique electric power trio. After touring, they made their debut on Telarc International with the 2010 release of Flood. They took their career to another level with the critically acclaimed album, determined to continue developing this raw, roots orientated sound without limitations. After the release of Flood, the power trio went on tour promoting their latest album with ZZ Top, George Thorogood, Jonny Lang, Buddy Guy, Robert Cray, Los Lonely Boys, and other blues and rock stars. Their 2011 release of Just A Dream featured a guest appearance by legendary soul guitarist Steve Cropper. This 12 song collection interfused the uniquely driving guitar of Aaron Moreland with the electrifying vocals and edgy harp of Dustin Arbuckle to create a cohesive masterpiece.

Telarc International Corporation, a division of Concord Music Group, is well known for their combination of rock, rural blues, Delta, and Mississippi Hill Country genres, creating a perfect fit for the Kansas trio. 7 Cities, their latest release, features the newest member of the band, Kendall Newby on drums, guests Eric Corson on bass, Josephine Howell on background vocals, with Matt Bayles and Matt Benham on keyboards. The album opens with "Quivira," a song telling the story of Spanish explorer Coronado and his fabled search in 1541 for the seven cities of gold in the Kansas plains, a location near the band's residence. Quivira is a place first mentioned by Francisco Vazquez de Coronado, who visited it during his searches for the mythical "Seven Cities of Gold." He led his army of more than one thousand Spaniards and Indian allies to Quivira, finding only the Great Plains. The song features the signature guitar of Moreland, the passionate vocals and harp of Arbuckle, and the haunting chants of Josephine Howell. "Kowtow" is an emotionally charged tune, again with the searing guitar leads, powerful vocals, and background vocals echoing throughout the song.

Electrifying slide guitar licks underlie the strong guitar leads and the cautionary vocals of Arbuckle warning "you better watch for "The Devil In Me." Aaron Moreland charges into "Tall Boogie" with his hard drivin', powerhouse rock and blues played on his handmade electric cigar box guitar, fueled by the blasting harp and vocals of Arbuckle and explosive rhythm section. After the grandeur of "Tall Boogie," the pace slows on the tune "Broken Sunshine" as you hear another side of Arbuckle's vocals. "Red Bricks" takes you on a trip to the Delta with this toe tapping instrumental. "Stranger Than Most" is more on the rock side with an opening reminiscent of Led Zeppelin's "Kashmir" and some underlying funk guitar.  Once again they return to the hard drivin' roadhouse sound on the tunes "Road Blind" and "Waste Away," with Moreland on his electric cigar box guitar. "Bite Your Tongue," written by Ryan Taylor, is the premier blues-rock track on the album. Unusual for the this group is the spectacular remake of one of the most powerful tunes of the '80s, the #1 hit by Tears For Fears "Everybody Wants To Rule The World." They complete the collection with the reflective acoustic tune "Time Ain't Long." As a grand finale, Moreland and Arbuckle finish with the blues-rock title "Modern boy."

Completely mesmerized by Aaron Moreland’s electric, acoustic, resonator, and cigar box guitar expertise, Dustin Arbuckle’s unequaled lead vocals and harmonica, the duos song writing ability, and Kendall Newby’s stellar drumming, percussion, and backing vocals, I would have to agree with the band that 7 Cities is their finest work yet. Dustin Arbuckle defines the group well with the statement "We’ve become a roots-rock band at this point, but I still believe part of what makes us so unique is our instrumentation."