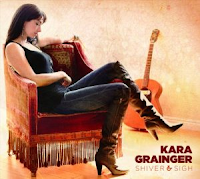 Originally from Australia, Kara Grainger was a member of a Sydney-based band Papa Lips, one of the area’s most popular blues bands. In 2008 she grabbed her guitar and headed to the U.S., settling in Los Angeles. She released her Grand and Green River recording in 2008, getting plenty of airplay on the American roots radio stations. Now she has signed with Eclecto Groove, a division of the Delta Groove label that targets acts that venture beyond the traditions of the blues genre.

The opening tune, “Little Pack of Lies”, features Grainger’s crystal-clear voice and a taste of her slide guitar as she warns off a no-good man. The title track offers more of her impeccable phrasing plus a deftly picked guitar solo. “Lost in You” is one of five Grainger originals and, like the preceding tracks, falls in an adult contemporary rock format. The singer’s warm voice expertly captures the tattered state of her emotions in the throes of a love affair.

“Shut Down” has more bite and a loose-limbed rhythm. As you listen, it is hard not to think of Bonnie Raitt, especially when Grainger lays down a taut slide solo. Bruce McCabe co-wrote the song and another one of his, “No Way You Can Hurt Me Now”, is a sturdy rocker that benefits from the way Mike Finnigan’s driving piano plays off Grainger’s robust vocal. The Mike Zito-penned “Holding Out for Love” has a strong hook that gives Grainger a chance to feature her soulful side.

Grainger really shines on a stirring version of Robert Johnson’s “C’Mon in My Kitchen”. Backed by her brother Mitch on harmonica, her fervent vocal and tough slide licks inject of life into this well-worn classic. The band slips into a funk mode on Grainger’s “You’re the One” with Finnigan impressing again, this time on organ, and Paulie Cerra adding his smoky sax to the mix. The smoldering intensity of Grainger’s performance on “Breaking Up Somebody’s Home” is another highlight, complete with horn flourishes from the Pacific Coast Horns – Cerra on sax, Paul Litteral on trumpet and George Stanford on trombone. The dramatic original “I’m Not Ready” showcases the complex tonalities of Grainger’s voice honed with a gospel influence. The pace slows on the closing tune, “Overdue for the Blues”, with another rich vocal over the sparse acoustic accompaniment.

Additional musicians include Hutch Hutchinson on bass, James Gadson & Jimi Bott on drums, Kirk Fletcher & Josh Sklar on guitar, and Lenny Castro on percussion. Producer David Z uses all of them to create compelling backdrops for Grainger’s honeyed voice. It may not be all blues but there is plenty to like here. It certainly would be interesting to see what this lady could do on a full album of straight-ahead blues songs. Make sure you sample some of these tracks on the Eclecto Groove website. Chances are you are going to like what you hear!