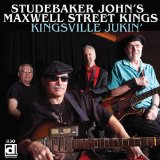 Studebaker John’s recent work for Delmark has been nothing less than superb.  He has returned to the music of his youth; growing up on Maxwell Street, he plays this old style of Chicago blues with authenticity and what appears to be a magnificent sense of what it is all about.  His early released stuff was good but these Delmark releases seem to make him feel comfortable and doing things that he really wants to do.  It is quite evident in his music that this is a man playing the music he loves to play and we are all better off because of it.

Mr. Grimaldi has prepared for us over an hour’s worth of music using vintage equipment to give it an authentic sound.  For the last song he even acquired a Recordio Machine where he did the original cutting on a 78 RPM record.  It sounds like the olden days with clicks and pops as old style blues emanate from the ashes like a Phoenix rising.  In total, what we have here are 16 original songs all written by Studebaker John, and it is just a great CD to kick back to and enjoy.

Joining John are the Maxwell Street Kings: Rick Kreher on guitar, Bob Halaj on bass and Steve Cushing on drums.  John provides the vocals, guitar and harp. The bass is an addition to the lineup from the 2010 Maxwell Street Kings release which was just a bare bones John, Rick and Steve; Bob Halaj appeared with John on his 2012 Delmark release Old School Rockin’.

Studebaker John ‘s influences are apparent here.  A heavy dose of Hound Dog Taylor with a little of all the Maxwell Street musicians he pays tribute to: Muddy Waters, Howlin’ Wolf, Robert Nighthawk, Little Walter, Mississippi Fred McDowell, Jr. Pettis, James Cotton, Little Walter and everyone else who played there.

The CD opens with “Mississippi to Chicago” and the deep and dirty boogie woogie beat is addictively sublime.  My foot instinctively began tapping as the song began and John gets you hooked on his good old fashioned blues.  The rhythmic simplicity and the great guitar work are trademarks of Studebaker in these old school CDs and it just makes you want to dance.  Harp gets added into the mix with the second track “When They Played the Real Blues.”  John gives us some dirty licks on the harp and he sings of the times when the Maxwell Street was alive with the blues.  “She’s Allright” gives us more of the primal beat and down and dirty blues.  “Shake It Down Now” is another guitar song sans harp where Studebaker John gives us a lesson in old fashioned slide.

Taking the tempo up to some hotter dancing levels we get to “The Rest is Up to You” where Grimaldi leads the band on vocals, harp and guitar and plainly tells us he’s “submitted his information” and “confirmed his destination” so it’s up to his woman to make a choice.  This is a relationship where you select one from column A and one from column B and move on!  Studebaker channels Hound Dog Taylor in so much of this CD, but “I Am the Houserocker” is straight up, throbbing Taylor-like stuff; “straight up from Chicago, directly to you!”  John burns up the guitar here with his slide work.  “Howlin’ In the Moonlight” begins with...well, howling.  John and the band break into a Phil Spector-like “wall of sound,” laying out the big and primal beat again with vicious, simple yet effective chords and repetitive licks that are almost animalistic as he sings about his urges (which include but are not limited to howling at the moon).  The harp solo also adds a dirty little niceness to this cut. “In Case of Fire” is a slower tempo-ed boogie that John uses to talk about taking care of his woman and protecting her from the heat of her (and their) passions.

“Ride Again” opens with the harp and guitar playing the same tune and then breaks into a very cool and hot highway song.  The title cut is an instrumental and the lead is cool harp licks a la Little Walter’s style. Grimaldi lays it all on the table here with some really impressive harp work!  He follows that with “Wicked Soul,” where the big assed guitar and the driving beat returns.  Fans who like this style of Westside blues will eat this up as he sings of the devil torturing him as he cries for mercy on his wicked soul.  The guitar solo “attack” serves well as a musical adaptation of the devil assaulting him and his soul.  “Cold Black Night” slows things way down in a thoughtfully laid out and played piece with guitar accompanying the vocals. He begins with a touch of harp, too, but turns to vocals and the harp does not appear until the next cut.  It’s a very nice track overall!

“Mojo Hand” takes in all the voodoo blues euphemisms as John sings of his voodoo woman.  His harp work here is also from the spirit world: intense and otherworldly!  He wants to use all the potions, herbs and whatever to make his woman do all the things he wants her to.  This is quite the cut and again one to listen to for some superb harp.  John follows that with “Shake Some For Me” where he gets into a high level boogie about his baby shaking her thing and making the whole place swing, but he wants her specifically to shake some for him.  There are some high end guitar licks here to enjoy here, too.  “Right Tonight” is another instrumental with a driving beat and harp histrionics.  The closer is the Recordio Machine 78 RPM recoding, “Bad Gasoline.”  Scratchy sounds, a superb acoustic guitar intro and play throughout, all sorts of great automobile sexual innuendos, and beautiful solo work by Studebaker John without backing musicians make for an outstanding effort that caps off 16 new songs by this master of the Maxwell Street Sound.

Some of the stuff here could be classified by some as monothematic and repetitive, but I liked it a lot!  Studebaker is doing a tribute to the old Maxwell Street blues here and he captures that era vividly and brilliantly.  I think Mr. Grimaldi is one of the more underrated blues artists out there; while he has not captured a lot of national attention in his long career, he is one of my favorites.  Every time I hear him live or on record (especially in these Delmark efforts) I hear a man who has paid his dues and is doing what he loves best.  His music is infused with his deep love of the blues and his work emits those feelings.  If you are a Studebaker John fan and don’t have this CD yet then you are not a Studebaker John fan- get hot and go get it!  If you want to hear a modern day take on what the Westside blues were in their heyday or to get acclimated to Mr. Grimaldi and his music, this is a superb way to do so.  I highly recommend this great new effort by a very talented guitar and harp player, singer and songwriter who has put together a great set of tunes and a great band to help him deliver them to us!