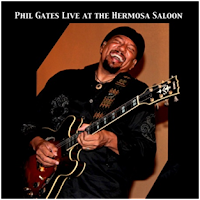 Phil Gates is originally from Chicago, but has been based for quite a while in Los Angeles.  On this recording, Phil on guitar is joined by Ron Battle on bass, Keith Williams on drums, and Morris Beeks on keys.  It is a live recording at the Hermosa Saloon, funded by a Kickstarter.  Previously, the group has released 5 CDs.  Phil has played on projects with the likes of Zac Harmon, Phillip Bailey, and Maurice White.  He also earned production credits with Little Richard, Zac Harmon and others.  There are two covers and nine originals on this disc.

“Addicted to the Blues” jumps out as the opening track.  It is catchy with a nice organ solo by Morris Beaks and guitar work by Phil.  Up next is a cover of “Messin’ With The Kid” with no harp.  It is powerful and enjoyable.  “Away I Go”  gets into a funky beat that allows the vocals to slid nicely thru the song.  A longer slower blues number “Used Me Up” is the next track.  Nice vocals and good playing carry this tune.  Track 5 is a bit more pop/R&B but not too sweet.  “Old School” shows some solid vocals and a tribute to the past.

“Summer in the City” with a new funkier pace is an enjoyable cover tune.  The band glides thru this oldie.  “End of Time” has a Buddy Guy 60’s feel to it.  Phil can handle the licks, with nice keyboard support….a good song for sure.  A bit more country blues feel comes thru on “Evening Train”  I like “Take It Out” as a catchy tune with fine lyrics about getting on with your life after issues.  A long, almost 9 minute, tune called “I’m Lost” is up next.  The band really cuts loose and extends itself on this one.  They are a tight band.    To close out the disc, the band plays “Get Around To Me”.  Not sure this was the last number of a set, but it is a fine contemporary song.  The jamming is not overdone, and they again display fine musicianship and vocals.

Fans of the band will love this disc.  Those of us new to them will love it, too.  I’d certainly go see them if I had a chance.