Come On Down reviewed by Rick Davis 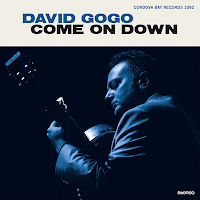 David Gogo met Stevie Ray Vaughan backstage at the Royal Theatre in Victoria, British Columbia at the age of 15, which was one of the events that inspired him to pursue a career in blues. By the time he was 16, he had assembled his first band called The Persuaders. His band had shared the stage with blues legends Johnny Winter, Buddy Guy, Albert Collins, Johnny Winter, Otis Rush, and Bo Diddley, and opened for George Thorogood, ZZ Top, The Tragicially Hip, Buddy Guy, Little Feat, and Jimmy Vaughan. After performing in support of The Fabulous Thunderbirds in Europe, he was able to sign a solo record deal with EMI Records. It was shortly after that he performed at the Montreux Jazz Festival with B.B. King, Otis Rush and Blues Traveler.

For his critical acclaimed debut album in 1994, David Gogo, he received his first nomination for a Juno Award. The Juno Awards, presented by the Canadian Academy of Recording Arts and Sciences, has nominated Gogo for a total of four times. The Maple Blues Awards honoring, the best in Canadian blues, nominated David 14 times, with him winning guitarist of the year in 2002 and 2004. He was also nominated twice for the INDIE Music Awards, happening in Toronto as part of Canadian Music Week,  twice for The Western Canadian Music Awards ceremony for music in the western portion of Canada, winning in 2012 for his album Soul Bender, once for the Great Canadian Blues Award, winning Best Canadian Blues Musician in 2004, and once for the West Coast Music Awards, winning Musician of the Year in 2000.

With credentials like that, it is easy to see why David Gogo is one of Canada's rising stars in the blues world. His 13th album titled Come On Down features 12 tracks with six new original tunes and six classic covers redone with his own signature, as a result of a recent trip along the "Blues Trail" in Memphis, Mississippi and Alabama. The album is a collection of both his rollicking music with a tribute to traditional blues and a stronger influence from the early rock 'n' roll. Including himself, David calls on the expertise of 15 singers and musicians throughout the 12 tracks. Gogo opens with some blistering slide guitar and solid vocals on "Bad 'n Ruin," a tune written by Small Faces keyboard player Ian McLagan and lead singer Rod Stewart. Gogo's lyrics and guitar solos are very strong on the title track "Come On Down," with gospel background vocals added on this haunting original song. "Call Your Name," the second original number, is another tune showcasing Gogo's superb guitar work, vocals, and songwriting expertise. He slows things down on the soulful, original tune "Worth It," a song co-written by David Gogo. More of the Louisiana Delta comes out on the original tune "Natchez Dog" in both Gogo's guitar riffs, Shawn Hall's harmonica, and the addition of superb keyboards. Gogo really explodes on guitar with his rough, roadhouse rocker "Kings," another original tune added to this new release. On a lot of the tunes on Come On Down, he blends his vocals and background vocals extremely well. He follows up with series of covers starting with an extraordinary version of "So Into You," one of best tunes written by the Atlanta Rhythm Section keyboard player Dean Daughtry, Buddy Buie, the band's manager and producer, and Robert Nix, the drummer. The last original tune on the album is a high powered, no holes barred rocker "Blue Eyed Daisy" and as the lyrics indicate, he put the petal to the metal much like the legendary Jimi Hendrix. The album continues as Gogo shifts gears with the classic R&B tune "Let's Go Get Stoned," a tune often performed by Ray Charles and written by Josephine Armstead, Nicholas Ashford, and Valerie Simpson. Gogo's vocals and guitar riffs are some of the best of the album on this tune. David continues with the Robert Palmer song "Looking For Clues." The album concludes with a Christine McVie tune "Spare Me A Little Of Your Love" and "World Turning" a song co-written by Lindsey Buckingham and Christine McVie of Fleetwood Mac.

If you have ever heard one of David Gogo's albums, you will understand why he has been labeled the hardest working blues artist in Canada. You will find Come On Down, his latest release is no exception to that statement.