All the Way reviewed by Mark Thompson 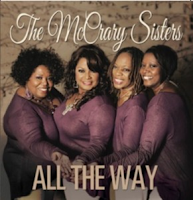 All the Way
The McCrary Sisters
McC Records
www.mccrarysisters.net
12 tracks/55:23

While you may not be familiar with the McCrary name, chances are that you have heard at least one of the four sisters singing backing vocals for legendary artists like Elvis, Johnny Cash and Stevie Wonder. More recently they have recorded with Dr. John and Paul Thorn. Regina spent six years with Bob Dylan while Deborah made appearances with Issac Hayes. Ann was a member of several highly-regarded choirs. Alfreda was content to work on music ministry with her husband at their local church. But several years ago she began to make public appearances with her sisters, rounding out the group's amazing vocal talent.

The sisters were raised in the church by their father, the late Rev. Samuel McCrary. Fans of gospel music will recognize his name as a member of the Fairfield Four, one of the greatest gospel quartets of all time. On their new release, his daughters expand on his lessons while demonstrating that contemporary gospel music can come in a variety of styles. That becomes immediately apparent on the opening track penned by Alfreda, “Come On”, as the sisters lift up a song of praise over an arrangement straight from the Jame Brown school of funk. “Talk to You” is a down-home blues with one of the sisters belting out a compelling litany about God's healing power. The brooding “Hello Jesus”, written by Deborah, is another highlight with Rob McNelly on lead guitar, Steve Macky on bass, Derek Phillips on drums and co-producer Kevin McKendree on keyboards. They also lend a hand on “Right Where You Are”, as the McCrary's testify to the sounds of McNelly's slide guitar and McKendree's driving piano lines.

Colin Linden guests on “Hum and Moan” playing slide guitar, bass and dobro. The track was produced by Tommy Sims, who also plays guitar on a haunting acoustic track about the eternal battle between good and evil. It is one of five songs Regina composed for the project. Their version of the Gary Nicholson and Tom Hambridge song, “Skin Deep”, features Allen McCrary's sweet lead vocal on an uplifting rendition of the title track from a Buddy Guy recording. The sisters show their sassy side on “Let It Go”, their glorious voices rising over a rocking arrangement accented by Quintin Ware on trumpet and Dana Robbins on saxophone. “Victory” sports synthesizers and programming, showing the sisters aren't afraid to use an approach that recalls the classic Pointer Sisters sound. The following song is Regina's gentle praise hymn, “You Can Make It”, that reminds us that all things are possible if you remain resolute in your faith, complete with a string section.

The liner notes provide complete listing of the musicians on each track but surprisingly fail to mention which of the sister's is singing the lead vocal. So we are left to assume that it is Ann's dynamic voice that rides the full arrangement on “Train”, a song she wrote about the familiar theme of riding to glory. The title song, written by Ann and Sims, finishes with a stirring declaration to keep on pushing and never give up.

While religion may not be for everyone, great music is universal. Once you hear the spirit in the voices of the McCrary sisters, individually or collectively, you will find it hard to turn away. Give them a chance to open your heart to the beautiful music they create on this fine recording.