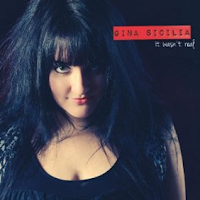 When I got this CD for review I was excited to have the opportunity to once again review the new album from one of my favorite young female vocalists, Ms. Gina Sicilia. I had the privilege of having the first review published for her first CD, Allow Me To Confess. As I have stated before, I have loved her voice ever since I first heard it on the CD during half time of Superbowl XLI. Not being a fan of the half time pomp and circumstance (and also not being a Bears or Indianapolis fan) , my friend Mark Thompson and I instead listened to this young woman’s CD and we were very impressed. Mixing blues, R&B and more, Gina’s first CD was a superb effort. I was sold from the opening lines of “That’s a Pretty Good Love.”


Gina’s voice grew and she continued to write excellent new songs and lyrics. Her second CD, Hey Sugar, expanded her repertoire a bit further. A little bit of country/folky songs were added to the mix and her sophomore release also made a great impression on me. Ms. Sicilia’s last CD Can’t Control Myself further showcased her voice as it continued to grow in depth and experience and presented perhaps us a darker side to her talents, mixing in angst and emotions she had only touched on before. It Wasn’t Real expands on that side of her talents, exposing hurt and pain as few women vocalist can emote and express.

Of the ten tracks presented, Gina wrote nine and chose Etta James’ “Don’t Cry Baby” as the lone cover. He growls and blasts though this song with such feeling and deep emotion. Jay Davidson’s sax adds a nice touch in his solos and Joel Bryant’s piano is solid throughout. Well done! I have to give a shout out to Scott Hornick on the big bass; he is solid here backing Gina as he always is. The CD opens with the title track and it jumps up and grabs the listener, telling them to hang on as this is going to be a big and emotionally charged ride. Sicilia sings how she’s been a fool all these years, expressing herself after getting suddenly dumped by someone she trusted. The band backs her nicely here as they do throughout and they deliver a really great song that I think will be covered by others as time passes.

“Please Don’t Stop” is a bouncy and sexy tune that Gina swings to the groove with. As she says, “I said no-no-o-o-o-o-o, baby please don’t stop” she really sells the tune. “Wake Up Next To You” has Gina pleading to have her baby go home with her so she can do what the title states. Dennis Gruenling adds his harp to the mix in “Walkin’ Along the Avenue” and Sicilia and he stroll and swing through this great little tune. Bryant is on B3 here filling in superbly. The ballad “City By The Water” is a breathy and cool number showcasing her voice so well. Davidson adds a soulful sax solo here, too.


“Write a Little Song With You” has Glenn Barrett on acoustic guitar, Mike Brenner on dobro amd Kevin Hansen on electric guitar and they blend well and add a lot of nice texture here. “Don’t Wanna Be No Mother” is another angst filled cut with a women looking back at her life. She no longer wants to be a mother or a wife; as she and the family fly off to Disneyland she expresses her remorse and frustration. “Oh Me Oh My” bounces back to a less remorseful setting. Mike Brenner’s lap steel is poignant as he solos here and Jeff Lee Johnson is solid on the more traditional six strings he plays. Gina bops and bounces through this one with her usual expressiveness. She closes with a C&W take off called “Walkin’ Shoes.” Ross Bellenoit and Jef Lee Johnson aptly twang on guitar to make this one rich and full to the genre and Gina nails it as she always does.

The band here is solid. In addition to those already mentioned, Erik Johnson is on drums throughout and is strong and also solid. Mayra Casales adds percussion on a few cuts, too. The guitar players switch up periodically and the axe-men do a fine job throughout.

Produced by Grammy-winner Glenn Barrett, the CD gives us a great set of tracks that Sicilia delivers the goods on. Her prior efforts were produced by Dave Gross, whom I am also a big fan of; Barrett adds soulfulness and edge to the mix and delivers another well-produced effort for Gina.

Sicilia has penned nine exceptional songs and delivers a great performance on each track. She is growing in her music and expressed in the promotional materials that she is evolving and always reaching for a new place for her music to go. As she searches for new horizons and produces new material for us, we can continue to accompany this fine young artist on a wonderful ride! Highly recommended!!

Posted by Crossroads Blues Society at 11:06 AM