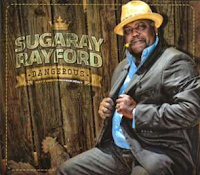 In a June posting on Facebook, Randy Chortkoff, owner of Delta Groove Music, mentioned being in the final stages of mixing the tracks for an upcoming release and added, “…by far the best album I’ve produced to date.” His ringing endorsement was directed at the label’s first solo effort from singer Caron “Sugaray” Rayford, who garnered acclaim for his contributions to the award-winning Mannish Boys Double Dynamite project. Chortkoff was so impressed by Rayford’s talent that he made the decision to give the singer featured billing in the group.

Many artists would fade into the woodwork while recording with top-rank blues veterans like Kim Wilson, Sugar Ray Norcia, Monster Mike Welch, Kid Andersen, Anthony Geraci and Fred Kaplan on keyboards, Willie J. Campbell and Bill Stuve on bass with Jimi Bott on drums. Rayford sounds right at home; his mighty voice riding any rhythm the all-star aggregation throws at him. He never overplays his hand, proving to be equally adept at rendering a downhome blues or letting his voice ring out on an up-tempo barnburner.

“Country Boy” bursts out of the gate with Rayford’s dynamic vocal commanding your attention. Taking his time on Pee Wee Crayton’s “When It Rains It Pours”, Rayford generates a slow-burning heat that contrasts nicely with Franck Goldwasser’s fluid guitar picking. One of Rayford’s originals, “Stuck for a Buck”, has him taking a bemused look at his precarious financial status with Rob Dziubla doubling on tenor and baritone sax plus Mark Pender on trumpet. Norcia joins the host for a duet on “Two Times Sugar” as the duo slides effortlessly through a celebration of their good lovin’ ways.

Chortkoff penned two of the highlights. “Goin’ Back to Texas” gives Rayford the chance to slow the pace while waxing nostalgic over the land where he grew up. Kim Wilson’s harp echoes the singer’s every move and Goldwasser adds to the country-inflected feel with some biting slide guitar. Wilson’s harmonica mastery is on full display on “Surrendered”, establishing the moody atmosphere while Rayford utilizes a gritty edge with his meticulous phrasing to testify to power of the human spirit.

The enormous depth of the singer’s voice is showcased on “Depression Blues” and Junior Parker’s “In the Dark”, capturing your attention over the combined weight of the horns and Andersen’s distinctive fretwork. On the latter cut, Chortkoff gives listeners a taste of his reed-bending skills. Another Rayford original, “Need a Little More Time”, has a stripped-down acoustic arrangement with Goldwasser on a National Steel guitar supporting the singer as he pleads for some relief from life’s pressures.

The tougher side of Rayford’s nature comes out on “I’m Dangerous” and “I Might Do Somethin’ Crazy”, the second cut a Wolf-like primal declaration of warning ignited by Andersen’s scorching licks. “Keep Her Home” sports a raging boogie beat with Big Pete on harmonica. Rayford finishes with “Preaching Blues”, a song from Son House. His forceful interpretation, over Goldwasser’s dancing slide guitar runs, highlights one last time the power of his voice in addition to his uncanny ability to capture the emotional heart of each song.

One listen to this recording makes it clear that Chortkoff wasn’t indulging in some form hyperbole with his praise for Dangerous. This disc is full of scintillating performances, particularly from the big man pictured on the cover. It took a while for Sugaray to get to this point in his career. It was time well spent as he is in full command of his voice, delivering one stirring moment after another on a disc that will undoubtedly receive plenty of attention come awards time. Highly recommended!