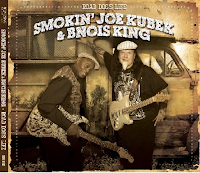 When Smokin' Joe Kubek and Bnois King joined to form the group Smokin' Joe Kubek & Bnois King over twenty years ago, it was a match that brought the essence of Texas style blues to audiences world wide. With the aggressive guitar style of Smokin' Joe Kubek, heavily influenced by the hard-rocking blues of the '60s and '70s, and Bnois King's smoother, more soulful, jazzier style influenced by the sounds of the 1950s and '60s, they have forged superb material since they met in the 80s. Kubek's roadhouse style guitar and King's jazz style guitar and deep roots vocals offer a perfect musical balance. King keeps the music directed in a traditional vein, while Kubek pushes the blues boundaries.

As a follow up to the their new approach to the blues, with their unplugged CD, Close To The Bone, they have returned to a format more typical of the earlier hard driving roadhouse studio albums, with the latest release Road Dogs Life on the Delta Groove label. With the exception of two cover songs, you are in for a real treat with this brand new collection of original material, along with a host of guest artists who have jumped aboard to create an all-star supporting cast. Joining Smokin' Joe Kubek and Bnois King are Kid Andersen from Rick Estrin and the Nightcats on guitar, Randy Chortkoff and Kim Wilson on harmonica and vocals, Patrick Recob and current bass player from Mannish Boys Willie J. Campbell on electric bass, and Jimi Bott on drums.

The album opens with the hard driven original tune about the legendary gambling king "Big Money Sonny" from Paducah, Texas, the Crossroads of America. Kubek's signature in-your-face guitar licks continue with "Come On In." They continue with the shuffle "Nobody But You," with Kim Wilson adding his superb harmonica and sharing vocals with Bnois King. "Road Dog's Life" rips into that hard rockin' Texas blues style, describing life on the road for a blues musician. The traditional blues song "K9 Blues" describes his treatment as a "K9" expressed by his fiancée as a result of a terminated relationship. Kubek electrifies his listeners with his guitar solos and Jimi Bott maintains a Latin beat on the original tune "That Look On Your Face." King likes to deal one on one or as he explains it on the hard driven tune "Face To Face." They defiantly put their own signature on "Don't Bother Me," a song written by George Harrison and appearing on the Beatles album With The Beatles. "I Ain't Greasin'" features once again the unsurpassed  Kim Wilson on harmonica, delivering a style familiar with the group The Fabulous Thunderbirds. "Talking Bout Bad Luck" stirs in a little Louisiana swamp beat along with some slide guitar delivered by Smokin' Joe. Randy Chortkoff is featured on harmonica covered on the Rolling Stones hit "Play With Fire." The album ends on a light note with the tune "That Don't Work No More."

Once again the extraordinary songwriting and stellar performance of the dynamic duo from Dallas have teamed up to create a chart topping album. The seasoned veteran musicians on this CD assist to make it one of best offered from Smokin' Joe Kubek and Bnois King.