Out Of The Blue reviewed by Mark Nelson 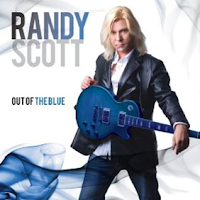 Out Of The Blue
Randy Scott
Favored Nations
www.randyscott.net
13 Tracks

Randy Scott was born in Detroit and went off to California to chase a musical dream.  The dream burst and he sold his guitars and worked for a computer company.  By and it was suggested he enter chance he wondered into a music store and after the manager heard him play, he entered into the Guitar Center 4th Annual King of the Blues contest.  He won the contest.  This led to a cable TV show called “Chasing The Dream”.  He was named Best Upcoming Artist by Ameriblues.com in 2012.  This is his first CD, and has no cover songs.

Opening the CD is a nice bluesy intro for about 18 seconds.  After that “Ramblin’ Man Blues” hits a mix of Boston meets Rush before finding a groove of blues rock.  Albert Lee sits in on this one.  Track 2 is “Whiskey From The Bottle”.   I like the piano on it by Jeff Babko as it brings in a bluesy feel.  Up next is “Nothin’ But A Thing”.  It is a rocking number with the obligatory solo, and an Albert Lee appearance..   Finally on “Can’t Quit On You” we get a slower grinding blues number.  Nice organ by Michael Murphy on this pretty good track.  “Never Enough” is a mid tempo rocker, without a lot of blues.

“Mean Hearted Woman” continues on the mid tempo rockin’ path of the CD.  The organ Michael Murphy again helps carry the tune.  Cut 7, is “Don’t Call It Love” is a nice rock tune, but not a lot of blues here.  Things slow down on “Kisses Like Cherries”.  There is some nice guitar work here.  Randy Scott does have a nice touch.  Vocals could be more powerful to help carry the tune.  An instrumental with a west coast feel, “Talkin’ My Baby Down” is pretty good.

Cut 10 is “Fire”, and I liked the intro at the start of the song.  After that is a bit slower, but marred by the vocals.  Another firey instrumental follows.  “Out Of The Blue” would fit well into a Joe Satriani CD, but not a blues CD.  “Hell To Pay” gets us back to the rocking side of Randy Scott.  The CD closes with a final instrumental “Tommy’s Tune”.  This is a pickin’ acoustic song that shows some quality musicianship.

Overall Randy Scott shows us his rocking side much more than his blues side.  I would expect rock radio to play this more than blues radio.  There is some good musicianship here, just not sure of direction.