This, That & The Other Thing reviewed by Rick Davis 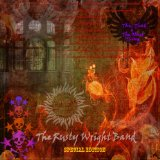 This, That & The Other Thing
The Rusty Wright Band
Sadson Music
www.rustywright-blues.com
13 Tracks

Rusty and Laurie LaCross Wright of The Rusty Wright Band could be the one of the best husband/wife blues duos in the Midwest today. Supported by superb, seasoned musicians Dave Brahce on keys, B3, and guitar, Peter Haist on drums and vocals, and Dennis Bellinger on bass and vocals, this is one of the premier Midwest blues bands to take the stage.

Rusty describes the new CD in a statement that he recently released. "When I was growing up, my favorite recording artists weren't afraid to be diverse or to show their depth of musical skill. From the Allman Brothers, to Rush, Led Zeppelin, and even Muddy Waters wasn't afraid to break the rules in blues when he went from playing traditional acoustic style to electric blues. He was one of the first to use a new-fangled thing called a "fuzz box." My point is, the best weren't afraid to combine different styles of songs on an album, and I always looked forward to being surprised by the music. That's what I've tried to do on all of our albums, and that's how this album came to be titled This, That & the Other Thing."

The band picks up where they left off on their national television debut on WKAR's Backstage Pass, the syndicated PBS music program, with the swing/gospel revival of AC/DC's rock version of "Whole Lot Rosie." Rusty's version definitely belongs to the blues world. It is my opinion that Rusty is one of most fluid, scorching guitar players around. Laurie with her smooth yet powerful vocals is featured as lead vocalist on "Man On Fire" and "Handyman." "Man On Fire" is the type of megahit that really unveils Rusty Wright as a guitar virtuoso. Only Rusty could create a fiery Duane Allman style slide guitar tune about the "nefarious" alarm clock, giving us all the "Alarm Clock Blues." "How Blue Are You" is a slow traditional blues number bringing both Dave Brahce and Rusty center stage. With the Mississippi swamp dweller vocals echoing in the background, this remake of  Mountain's "Mississippi Queen" could easily bring Leslie West and Rusty Wright toe to toe in a guitar shootout. Rusty and Laurie team up to trade vocals on "Trouble And The Marryin' Kind," with Rusty operating his wah-wah petal to perfection and Dave Brahce once again featured on the B3. The entire band is showcased on the instrumental "Hide In Plain Site" with the rhythm section, especially Dennis Bellinger on bass, driving the tune." "Baby Roll On" does a great job of exposing that southern rock element to their latest release. "High Priced Woman" once again displays the superb vocals and slide guitar expertise of Rusty Wright. The Candye Kane inspired tune "Handyman" would be a perfect song for the swing and boogie woogie era of the '40s. The smoky, steamy blues tune "Pen Or Sword" describes the state of a nation, giving us some insight into the incredible song writing abilities of the group.

It appears like This, That & the Other Thing is the culmination of many intense hours of perfecting their craft.  After sampling this latest effort from The Rusty Wright Band, you will be convinced that this band is on top of their game. It is one of the best collections of blues and Southern rock that you will find anywhere.