Great Day In The Morning reviewed by Rick Davis 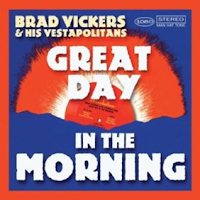 Americana music is a blend of different roots music developed by the convergence of the shared and varied traditions that comprise American musical standards. Americana grew specifically from American music genres like folk, country, blues, rhythm and blues, rock and roll and other external influences. It is defined by the Americana Music Association (AMA), as "contemporary music that incorporates elements of various American roots music styles, including country, roots-rock, folk, bluegrass, R&B and blues, resulting in a distinctive roots-oriented sound that lives in a world apart from the pure forms of the genres upon which it may draw. While acoustic instruments are often present and vital, Americana also often uses a full electric band."

The band's latest release, Great Day In The Morning, draws from the talents of Vickers on guitar, Margey Peters and Charles Burnham on fiddle, Bill Rankin on drums, Dave Gross on mandolin, rhythm guitar, and bass, V.D. King on banjolele, Jim Davis on clarinet and tenor sax, Matt Cowan on baritone sax, Michael Bram on mandolin, and Jeremy Baum on piano and the Hammond B3 organ. Brad Vickers, Margey Peters, Christine Santelli, and Gina Sicilia share vocals, with Vickers being the predominate vocalist. With a short intro, the band leads into "Little Gem," a special blend of county fiddle and jump blues provided by the saxophones, guaranteed to be a toe tapper. "Train Goin' Westward Bound" is a snappy follow up tune with banjolele, mandolin, saxophones, and Vickers on bottleneck guitar and vocals. "Saving String" is very reminiscent of the Bob Wills tune "Oklahoma Rag." "Sit Down And Talk" is a very basic, slow, Delta style blues tune. The title track "Great Day In The Morning" is an early morning eye opener better than a cup of Irish coffee, featuring Charlie Burnham on fiddle. Even the lyrics "great day in the morning, life comes to you without warnin'; you're the star of your own show so come on let's go" are invigorating. Margey Peters adds more of a county element to the lead vocals on "Saturday Blues" which is a perfect fit for the tune. The tongue-in-cheek, hill county tune "Chapter And Verse" turns toe taping into foot stompin'.  "It's A Good Life" is another uplifting tune with a little boogie woogie piano added by Jeremy Baum, creating more jazz flavor to the song. The Lizzie Douglas (a.k.a. Memphis Minnie) tune "Frisco Town" is short southern blues tune. If you have ever had one of those days when nothing goes right, you will appreciate the whimsical tune "This Might Not Be Your Day" which we all can relate to at some point in time. Vickers performs superb bottleneck guitar solos along with Dave Gross playing rhythm guitar on the Tampa Red tune "Anna Lou Blues." The tempo picks up on the hot little blues shuffle "The Way It's Got To Be." "Together For Good," a gospel tune that features Gina Sicilia on lead vocals along with harmonizing background vocals much like a Baptist church choir. The album concludes with the 100 year old "Dallas Blues," the first published blues tune written in 1912.

If you are looking for the perfect recipe for American roots music, "Great Day In The Morning" is your "diamond in the rough." It is American roots music like you have never heard it, loaded with Americana, blues, ragtime, and hill country breakdowns. It is a great way to start your day!