When It Comes To The Blues reviewed by Mark Nelson 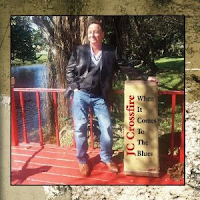 JC (Joseph Cannizzo) is a guitar player now based in South Florida, but originally from New York.  He played in rock bands around the NY area and put together the Stevie Ray Vaughn tribute band ‘Crossfire’ in 1994.  He moved to Florida in 2003.  I believe this is his 3rd disc.
This disc contains 9 originals written by JC and other band members.  The five piece band gives a full sound.  It is a modern blues sound, which is not trying to recreate the past.

The CD opens with the title cut.  It’s a slow groove with some nice harmonica fills from Niles Blaize.  It’s a pretty strong piece of music.  “Deliza” follows with some extended keyboard fills.  “Grand Ole Girl” fires out more with some snappy rockier guitar and some harmonica fills.  Track 4 ‘Blues. Bleus, Blues” could be more powerful.  This song could jump out at you, but feels tethered a bit.  The band slow it down with some nice soulful vocals on “Tell Me Why”  There are some powerful riffs near the end of this five minute effort.
Bernie Rose supplies some nice piano work on “One More Time”.  Vocals again could be a bit more out in front on this cut.  JC makes a political statement with “American Way”  It might be a good song for Congress to listen to!  JC cranks up his guitar on “Chosen One”.  He has some chops.  The final cut is “”I Wonder”  slows back down a bit.  I suspect this one might get an extended play in a live setting.

This is a disc we all can relate to.  No gimmickry in the guitar work, and a full sound.  He vocals are not great, but the will suffice.