Beale Street to the Bayou reviewed by Steve Jones 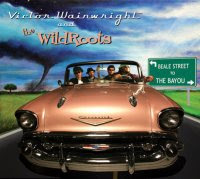 Victor Wainright and the WildRoots

When I saw the cover of this CD with Wainwright and the band cruising in a late 50’s vintage pink Chevy I hoped that the music inside would be as much fun as the packaging. Luckily, it was. This is an upbeat and fun album that hearkens back to the early rock days where the blues influence was so strong. A lucky thirteen original tracks and one Ray Charles cover comprise this strong musical set from this based band (via ,, and ).

Victor Wainwright is a boogie woogie “piana playa” from with a hot left hand and perhaps a hotter set of vocal chords. He can belt out a tune with great aplomb. His piano and vocal virtuosity is matched by bassist, vocalist, backup guitar player and songwriter (of most tracks) Stephen Dees. played and sang with the likes Hall and Oates, Todd Rundgren, Pat Travers, and Foghat. These two provide the anchor to the WildRoots, but drummer Brian Kelly and lead guitar player Gerg Gumpel add their strong musicality and talents to the mix to create a solid quartet of musicians.

From the start to finish we get to hear music played with both great talents and great instincts. “Mighty Man” starts us off with a guy singing about his prowess in the bedroom and then switches to a funky environmental song called “Planet Earth”. After these first two numbers I was impressed but wondering a bit. But then a short acoustic number with harp and vocals that sounded right out of the delta called “Sold Down River” and a wolf howling “Long Way to Go” that gave us a more traditional piano blues approach told me that this really would be the fun ride I’d hoped for.

I don’t have space to comment on all the tracks, but “WildRoot Jam” was a nice jam session adding other pieces to the mix and “School of Hard Knocks” has great, big organ and guitar solos that were impressive. The title track closes the album out with a big, raucous boogie sound. Even the Ray Charles cover of “What’d I Say” sounded pretty cool; Wainwright’s organ and vocals grew on me to the point that I really enjoyed it. No one can do Ray better than Ray, but this cover was nicely done.

This is a band whose basis is founded in Wainwright as front man, but they work as a cohesive team to produce a great overall sound. When Wainwright is not singing or playing lead we get to hear the other members step up and play their hearts out. The extended WildRoots members and guest musicians also step up to fill in quite admirably. All in all, this is a solid CD with a great set of musicians. Boogie woogie piano and early blues rock fans will thoroughly enjoy this album!

Posted by Crossroads Blues Society at 8:15 AM No comments: