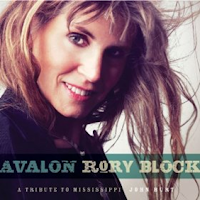 “Avalon” is Rory Block's fourth recording which pays tribute to blues artist who influenced her musical talent. Rev. Gary Davis, Mississippi Fred McDowell and Son House preceded this recording that features ten songs from Mississippi John Hurt and “Everybody Loves John” penned by Block. This last song tells of her strong feelings for Hurt and his blues talent. Rory Block has risen to a top spot as an acoustic guitarist, singer and song writer. After over forty years of honing her skills she has won numerous awards and released a bunch of fine blues recordings. Check out www.roryblock.com which has a great biography of her.

With the release of “Avalon”, Rory Block seems to take a more relaxed, almost joyful mode in her interpretation of these songs of Mississippi John Hurt. Her vocals, to me, are not as rough and gritty but have a less edgy solid blues quality to them. Being a very talented finger picker and slide guitarist Rory enables her guitar to express these tunes with great feeling and emotion as her fingers work the frets. This is really a treat to sit and listen to her as she releases her feelings for each track of “Avalon”.

Rory opens the CD with “Everybody Loves John”. This tune highlights her finger pickin' guitar style while she takes us on a blues trip about her feelings for Mississippi John Hurt. Adding to the reverence of this tune is the inclusion of some really fine gospel type background singers. This tune makes a strong statement right away about the great talent that Block  has achieved. “Candy Man” is one of my favorite tunes on “Avalon”. Block seems to have a field day with her vocals on this tune. Her range travels from highs to lows in a fun mood as she skillfully fingers her way down the blues highway with her guitar.

“Avalon” is filled with a great list of Hurt's well known songs which includes “Got The Blues Can't Be Satisfied”, “Stagolee”, “Make Me A Pallet On Your Floor” and “Spike Driver Blues”. Rory puts her own take on each of these songs and plays with solid talent and emotion. While doing this she makes you listen and want to listen to each and every tune on the recording.
Rory Block has gotten many praises over the years which have been well earned. Some of these include “best FEMALE acoustic blues artist”, “the greatest FEMALE Delta slide guitarist” and numerous other compliments making her the best FEMALE whatever in the blues world. It is about time that it should be stated that Rory Block is a outstanding blues artist without qualifying the compliment! “Avalon” is really a fine example of blues being showcased by one of the best acoustic blues artist out there. If you are a fan of acoustic Delta blues and slide guitar, Rory Block's “Avalon” is a CD for you to take a long listen to.