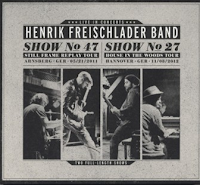 The 4-disc album "Live In Concerts" by Henrik Freischlader Band was self-produced by German guitarist and song-writer Henrik Freischlader and released August 30, 2013 on Cable Car Records.  The album consists of two live shows from two tours: one show in Arnsberg, Germany on May 21, 2011; and the other show in Hannover, Germany on November 8, 2012.  All but six tracks were written by Freischlader.

Freischlader, an autodidactic (self-taught) multi-instrumentalist (guitar, bass and drums to name a few) from Wuppertal, Germany self-produced the album under his own label, Cable Car Records.  The band formed in 2004 and has toured with mostly sold-out shows throughout Germany and Europe, opening for other blues performers like BB King, Peter Green, Johnny Winter, Joe Bonamassa and the late Gary Moore.

The four-disc album has over four hours of blues recorded at two live shows.  The band writes and sings in English so you forget they are German until they speak to the audiences between numbers.  Some tracks are heavy, almost metallic electric blues while others are sweet and yearning.  With over 30 tracks, there are too many to individually mention but the album is definitely worth a listen.  Try it on a rainy day while you do housework or simmer homemade soup and soak in this band's blues.  I'm sure we'll hear more in the future from these talented musicians.