Blue As Can Be reviewed by Mark Nelson 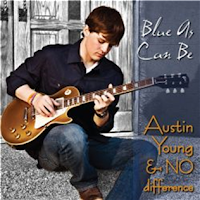 Blue As Can Be
Austin Young and No Difference
VizzTone
http://www.austinyoung-band.com
13 Tracks

From Colorado comes the debut recording project for Austin Young.  He is a young guitar player, and this is his debut CD.   The band is a trio, with his father Tim Young on drums, and Noah Most on bass guitar (some keyboards are included too – Tom Tapec).  All the cuts come from the band members and their friends, no old time covers are included.

“Thunderhead” opens the CD with a powerful guitar riff and a song that lives up to the title.  Jeff Healey comes to mind for me on this one.  The 2nd cut is titled “Blue As Can Be”.  Austin’s guitar dances on top of the solid bass drum line.  The vocals are fine and show some touch by Austin.  On the next cut the level slows down.  It is a nice touch to showcase a mellow touch on the guitar by Austin.  “Disappearing Railroad Blues” is a fine song that could touch over to rock airplay also.  The intensity comes back up with “Signals”.  I would bet this one gets a long jam in their live shows.

The 5th cut is a very different song called “Springtime Snow”.  It is a soft ballad that really works.  The cut shows a softer side with solid lyrics to go with it.  Next up is “Magdalena”.  Austin teams up on acoustic guitar with Jim Adam on National Steel guitar.   The band roars back with the next cut “Not As Strong”.  It is a real toe tapper with strong guitar.  This cut is followed by “Who’s Coming Out” which will get everyone up dancing.  Hit the honky tonk and bring your dancing shoes with this one.  “Borrowed Time is the net cuts.  It starts a bit slow, but gets a great jam near the end.  It could be a great closing number for a live set
So far the disc covered a lot of styles.   On “That’s It”, the next cut we hear a jazz tinged number with a skat solo included.  Next up we get a slow heavy blues number called “Give Me One Good Reason”.  It’s a killer with fine vocals and stinging guitar.  Walking Through” is the next to last tune.  The addition of some background singers is a nice touch for this uplifting, positive message tune.  The CD closes with “Miss You Moore” a tribute to Gary Moore and all the other musicians who have recently left us.  As an instrumental, the playing has to carry the emotion, and this one does it!
A young guitar player has to draw comparisons to Jonny Lang, Kenny Wayne, and as mentioned before Jeff Healey.  Austin Young has put his footprint on the blues horizon.  This is a disc with many styles.  We will see where his career takes him stylistically.  His voice will continue to mature as he gets older.  I think he will be around for a long time.  Might he be the cross over to bring more people back to the blues???  Time will tell.  Until his next disc, ENJOY this one!