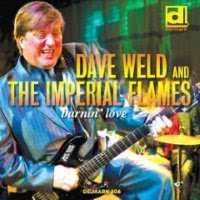 It has it been almost fourteen years since Dave Weld recorded and released the Earwig album “Keep On Walkin’”.  Time sure does fly.  Dave spent most of those years caring for his ailing mother, Donnie Lee.  If you’ve spent any time at all with Dave, you know how much family means to him; his touring and recording took a distant second place to his family commitments for much of that time.  Now he is back on the scene in full swing with a brand new Delmark CD, his first for the label, about eleven years in the making.  Dave and his band members wrote most of the songs for the CD, and it is some great original stuff!

In addition to Dave on guitar and vocals, the band consists of Abb Locke on sax, Jeff Taylor on drums and vocals, Dave Kaye on bass and Monica Myhre on vocals and tambourine.  Harry Yaseen fills in on piano and Bernard Reed and Herman Applewhite are on bass for two and one track apiece. Weld was schooled by many of the Chicago greats, but certainly Grammy winning Blues Hall of Famer J.B. Hutto had the biggest impact on Dave.  Hutto also introduced Weld to his nephews Ed and Pookie which cemented into a long term relationship that continues to this day.  Lil’ Ed appears on this CD to support his old friend; both he and Dave play a style of guitar that pays homage to the late great Hutto.

“Sweet Shiny Brown Eyes” has been a staple at Weld’s live performances for 12 years now, but he says it now fits Monica to a tee.  Weld is so adept in his song writing style, telling vivid stories which he sings with great gusto.  Myhre harmonizes with Weld nicely here and Welds’ guitar just blows you away with the solos. “She’s Mine” is similar, a Weld tune they’ve been playing live for a good while to the delight of their fans.  Weld complains about the problems with living in Chicago in “Ramblin’”, a Weld/Myhre song where Locke unleashes his tenor sax for a his first sweet long solo on the CD’s second track.  The title track was inspired from some of Weld’s old girlfriends whose “hot lovin’” unfortunately lasted long after the actual act, requiring penicillin to clear things up.  It’s a jumping tune with lots of great guitar riffs and more from Locke and Weld.

Taylor ’s vocals on his songs “I Got Mad” and “All of These Things” are a little more restrained in comparison to Weld but showcase his smooth, suave and cool vocal style.  Locke, Weld and Lil’ Ed also have greats solos on these tracks.  Myhre fronts the band on her tracks “Talk Dirty” and “Listen to Mama”. On the first song she is very much doing so in a “Debbie Harry does the blues” sort of style, which sounds pretty darn cool.  Her main man Dave inspired the song while her Mom was motivation for the latter.  “Listen to Mama” also shows off her inspired, sultry voice.

Lil’ Ed Williams wrote and sang on “Ed’s Boogie”, a swinging boogie woogie tune with Abb, Dave and he giving up some fine solos.  Weld also covers a Hutto song, “Things Are so Slow”, which is quite appropriate for these economic times.  More compelling vocals and solos by Locke and Weld.  “Donnie Lee” is a tribute to Dave’s Mom, giving us a taste of how great a woman and what a role model she was.  Weld closes with “She’s Lyin’”, a jumping song with a boogie woogie beat that was also inspired by Weld’s past loves.

This is a fun album that will give the world some exposure to what we in the local area already know- that Dave Weld and the Imperial Flames are a hot and inspired blues band worthy of broader acclaim.  This is a fine CD done in the Chicago style with great vocals, guitar and saxophone.  I highly recommend it!
Posted by Crossroads Blues Society at 8:58 AM No comments: