Blues In My Soul reviewed by Harmonica Joe Poluyanskis 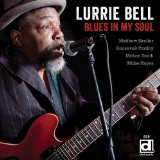 Lurrie Bell has been a member of the blues family for a long time. With the great harmonica player, Carey Bell, being his father and with Eddie C. Campbell as his Godfather the blues influence was ingrained in him at a young age. Lurrie has had a long career and has played with many of the great blues artist. Koko Taylor, Eddie C. Campbell, Billy Branch and of course Carey Bell are among the many he has shared the stage and studio with. As his career seemed to be going on a strong steady path upward hard times and trouble started to drag him down. During those days he was afflicted with drug abuse and emotional problems for many years. He also suffered a period of being homeless and living on the streets. He was truly living the blues. A comeback in 1995 put him back into a place where he is really one of the best blues guitarist and performer around.

Delmark Records has now released “Blues In My Soul”. This CD lets Lurrie Bell take a trip to the roots of Chicago style blues guitar playing. Included on the recording are 14 solid hand picked tunes that include 3 written by Bell. This recording is over 1 hour of some really strong blues.

“Blues In My Soul” features the musicians from his fine working band. Backing up Bell's guitar and vocals are Roosevelt Purifoy with his tasteful keyboard and piano playing, Matthew Skoller blowing blues harmonica and Melvin Smith laying down the bass line. Willie Hayes does a solid job of drumming as the horns of Marques Carroll, Chris Neal and Mark Hiebert are are also brought into the mix on 2 tracks.
Lurrie's tune “Blues In My Soul” is one of those slow blues songs that really give you the real feel of the blues. Bell's guitar sends out the mood of this tune by highlighting his playing with a special less is more quality. Do not even look for too many notes played too fast on this recording. Purifoy adds his emotional organ  playing to the mix as Bell sings the lyrics of loves and life getting better. The vocal quality from Lurrie is the true “yes, I know what the blues are about and I am telling you the story”. “24 Hour Blues”, another Bell song, is dedicated to Magic Slim who passed away the day it was recorded. Bell shuffles along with that quality and sound that has that Magic Slim vibe to it. Again Lurrie takes his time and lets the guitar  sing the blues.

“My Little Machine” features Matthew Skoller with the harp on this solid slow blue tune. This track gets us ready for the strong cover of Little Walter's “I Just Keep Loving Her” with Skoller playing Walter in his own great style. Add the standout piano playing of Purifoy to Bell's guitar and vocals and we are treated to one heck of a blues tune.

“Blues In My Soul” shows that Lurrie Bell has had his ups and downs, toil and troubles but still has settled in a good place being able to showcase his many talents. He and his fine band have done and outstanding job presenting these tunes and leave us with the feeling that this genre can survive in the future. The blues are not all just doom and gloom. I will say that “Blues In My Soul” is a bright spot for us to take into our head. Yes, a job well done.