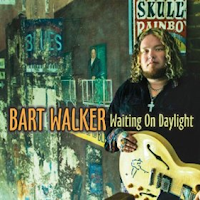 
Here's another guitar player vying for your attention with his second release, first for a major label. Bart Walker has definitely chocked up some noteworthy moments in his career already, including winning the Gibson Guitarist Award at the 21012 International Blues Challenge. He also has been a fixture in country star Bo Bice's band in addition to playing in the house band at BB King's Blues Club in Nashville. Reese Wynans, former keyboard player for Stevie Ray Vaughan, did a stint in Walker's touring band. His track record certainly points to Walker being a talented guitarist.


Right from the start, you get a hefty dose of Walker's brawny guitar style and his deep, forceful voice.


“It's All Good” finds him demonstrating his skills on slide guitar. Then he lays down a massive groove that rocks hard as he belts out his promise for better things ahead on “Black Clouds”. Walker's slide guitar rides a grinding rhythm on “Girl You Bad”, with the singer in a worrying frame of mind over a woman that has turned his world upside down. The rocking continues on “Happy”, complete with a fleet-fingered solo from the leader. The title track is a ballad that finds Walker in a pensive mood, hoping that the morning light will bring a measure of forgiveness. The notes he squeezes out of upper end of his fret board offer a fine counterpoint to his spirited singing.


Highlights include a fierce “Took It Like a Man” that finds Walker describing his method, for better or worse, of dealing with life's trials and tribulations while “Gotta Be You” is another track with relentless drive as Walker issues a gritty declaration to his love interest before breaking out his wah-wah pedal on the closing solo to seal the deal. “99%” addresses the current state of affairs and Walker's blazing guitar forays make it clear that he is none too satisfied.


Walker tears through J.B. Hutto's  “Hipshake It” with the rhythm section of Dave Smith on bass and Steve Potts on drums providing a memorable kick. Rick Steff's organ fills offer a nice contrast to Walker's slashing slide licks. Dave Cohen's lone appearance on organ comes on the final track, a stellar cover of the Allman Brother's “Whipping Post”. Walker plumbs the depth of emotions in the lyrics, refraining from cutting loose until the end,  when he attempts to purge his demons with a final cathartic solo.


Walker had a hand in writing seven of the tunes with help from Brandon Gower and Gary Nicholson. The end result is a disc that illustrates the extent of Walker's talents and gives us a vivid reminder as to why he received the Gibson Guitar Award. If you like your blues with a strong rock backbone, you definitely need to hear this one.