Play One For Me reviewed by Steve Jones 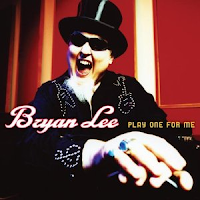 Play One For Me
Bryan Lee
Severn Records
www.severnrecords.com
10 tracks/43:43

This album is a real departure from the norm for Bryan.  Completely funky and soulful with the Severn Records house band and a huge horn and string section arranged and conducted by Willie Henderson, Lee gives us a very interesting and thoroughly enjoyable addition to his repertoire that I am sure will garner him great notice and some accolades to boot!  It is a super little album for this now 70 year old super star of the blues.

The opener is an old Memphis soul tune written by George Jackson and Willie Mithcell, “Aretha (Sing One for Me).” It is a tune where Bryan pleads soulfully that if Aretha sings a song for his girl that maybe she’ll come back to him. He then moves into some Freddie King with “It’s Too Bad (Things Are Going So Tough For Me)” when he wails on his axe and Kevin Anker tickles the keys sweetly in support.  A Bobby Womack cover follows, “When Love Begins (Friendship Ends).”  Lee is more evenly soulful than the edgier Womack and it comes off nicely done.  His guitar also helps to sell this as he picks out a very cool solo; the strings and horns are supremely cool here, as is the organ in the background.  Up next is the classic Howlin’ Wolf/Willie Dixon tune “Evil Is Going On” where Bryan growls and grunts along with Kim Wilson blowing some mean harp.  The keyboard here is also special; Lee, Wilson and Anker have really given this cut some dirty and cool freshness.  “You Was My Baby (But You Ain’t My Baby No More)” is the first of the original cuts and Bryan lets his unfaithful woman have it both vocally and with his guitar.

“Straight to Your Heart” continues in the funky and soulful vein and Lee continues to deliver the goods. A Dennis Geyer song, Lee gives it a great effort.  “Poison” is next up, straight up Chicago blues.  Kim Wilson plays some hot harp and Bryan’s vocal are distorted as if he  sings through a harp mike.  It’s very well done and very hot and dirty sounding.  Wilson solos first and then Lee comes in with his guitar and just makes this one complete.  “Let Me Love You Tonight” has the Memphis sound all over it with a bouncy and swinging groove and a beautiful rounded out guitar sound.  This may be THE song of the album that will have a great life of it’s own!  “Why” is a slow and thoughtful piece with a deliberate beat and guitar work that Lee excels at.  He completes the recording with “Sixty Eight Years Young,” which could be an answer to the many blues men’s songs where they sing of getting old.  Here Lee regales that at 68 he’s happy to still be getting it done.  Very funky and neat– hand claps, percussion, organ, bass, drums and rhythm guitar set this up for Lee who then hits a home run with his vocals and lead guitar.

It’s different.  It’s new.  It’s fresh.  It’s soulful.  It’s Bryan Lee like we’ve never hear him before.  A huge house band along with the folks noted previously and Johnny Moeller supporting on guitar, Steve Gomes on bass, Robb Stupka on drums and Mark Merrella on percussion all give Bryan some super backing and allow him to fully express his soulfulness.  This is some of Bryan’s best work ever– I was really impressed.  If you love Bryan as I do, go get this.  If you are new to the Braille Blues Daddy you will see a side of him that we sometimes get to hear in snippets that is expanded and nurtured into a beautiful set of soulful tunes.  Well done to both Bryan and Severn for delivering a superb CD for this most deserving artist!