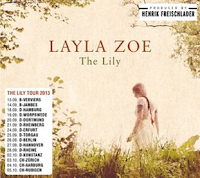 "The Lily" is the seventh album for Victoria, British Columbia born Layla Zoe and was released August 30, 2013.  The Montreal-based singer and song-writer has been singing since she was four years old.  She began performing to audiences with her father's band when she was only 14.

The 30-something Zoe has been compared to Janis Joplin by fans and critics alike due to her raw vocals and emotional on-stage performances.  Zoe has toured Europe and Canada and performed with numerous musicians including the late Jeff Healey, Danny Marks, David Gogo and Pistol Pete.  "The Lily" pairs Zoe's lyrics and vocals with German guitarist Henrik Freischlader's music on most of the tracks.

I liked two tracks best: the title track "The Lily" and the Neil Young/Jeff Blackburn number "Hey, Hey, My, My".  Listen to this album when you have a quiet hour plus and the opportunity to curl up with lyrics in hand and soak up Zoe's storytelling and Freischlader's guitar.