In The Belly Of The Blues reviewed by Steve Jones 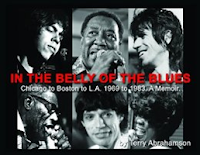 
Terry Abrahamson grew up on the West Side of Chicago and finally discovered the blues at age 18. As with most kids of his generation (and mine, although he is a “whole” 4 years older than me), he claims that bands like the Beatles, Yardbirds and Blood, Sweat and Tears shaped his youth and musical appreciation.  Like many of our generation, the exposure to the music of blues royalty quickly aligns your musical reference plane.  Howlin’ Wolf exposed to him the roots the music from the Yardbirds, Cream, Mountain, Jimi Jendrix, Led Zeppelin and the Stone.  “Howlin’ Wolf was big and Black and primitive and scary and like nothing I’d ever seen,” writes Abrahamson as he introduces his book with two shots of The Wolf.

The book is a beautiful collection of photos and Terry’s remembrances of the scenarios that the photos captured.  Taken with a Kodak Instamatic with flashcubes, a Minolta SLR and a mini-Chinon camera (“with Lincoln Continental suicide doors,” as he called it), the photos were taken somewhat randomly throughout the 14 year period he interacted with many of the gods of the blues.  I met and chatted with Terry at the 2013 Chicago Blues Festival and told him I was pleased to have the opportunity to review his book.

A word of note…Terry is also a songwriter, having penned “Electric Man,” “Unk in Funk” and “Bus Driver” for Muddy Waters.  Joan Jett, Geroge Thorogood and many others have also recorded Terry’s songs.  But it is his wonderful collection of photographs encapsulated in this book along with the stories behind them that are truly incredible and historical.

The photo trail begins at Alice’s from 1969 to 1971 in Chicago.  A small, 20 foot wide club where you sat on the floor with a two foot high stage at one end, he writes of his experiences there and shows us some shots of Muddy Waters and his band there at Alice’s where he would pay a $2 cover to get in.

In 1971 he and his friends in the Cooperative Bluespower produced blues shows at the U of I in Champaign.  They were determined to bring this music to the students who were used to seeing shows like he Stones, Jethro Tull, Jefferson Airplane and the Temptations.  They “captured” artists enroute to and from Chicago to expose students to the blues.

He reminisces about first meeting B.B. King in 1971 at Mr. Kelly’s on Rush Street. He tried to sell B.B.  a song but sadly all Mr. King wanted was Terry’s boom box.

He goes on to talk about Not-Totally Blind Jim Brewer, who really only had cataracts and was not totally blind.  Brewer was the one who pushed Abrahamson to get Muddy to record Terry’s song “Electric Man.” The song was inspired by Brewer’s desire to “plug-in to one of the female fans at his show as Abrahamson wrote the lyrics to describe Brewer’s desires.


In 1973 he left for Boston and wanted to hold a blues fest.  He needed an opening act for Jim Brewer and “discovered” George Thorogood playing at Joe’s Place. Working with George and George’s mother in Delaware, he got Thorogood via train to appear at many of his events in Boston, an audience of mostly college kids.  During all this, George recorded the Celtic’s theme song “Champs Again.”  Written by Terry and Herb Fuerstein, the song was played at every home game for at least two years.

Muddy came to Boston and Abrahamson marveled how well Waters and other bands were treated in comparison to Chicago where they were based.  He writes and depicts Hollywood Fats and Bob Margolin who played with Muddy and has a plethora of great shots of Muddy with band mates Pinetop Perkins, Willie “Big Eyes” Smith, George “Mojo” Buford, Calvin “Fuzz” Jones and others.

Terry shows us shots of Joe Spadora’s Place where Joe reintroduced blues fans to an aging Howlin’ Wolf.  Accompanied by the likes of Hubert Sumlin and Eddie Shaw, there are some priceless shots laid out in the book.

Hound Dog Taylor and his band are also shown, but Abrahamson expresses some remorse he never got any shots of Taylor frying chicken in motel rooms in the electric frying pan he toured with.   He shows us and talks a lot about many great sidemen, too.

Johnny Winters has a pre-eminent spot in the book during the era he resuscitated Muddy Water’s career and vaulted Muddy to real stardom and the money and recognition he deserved as an artist.  There are some great shots of Johnny taken in 1975 at the Bottom Line in NYC.

1979 has a photo of Muddy and his kids from then-wife Marva which is quite touching.  It is also the evening his manager Scott Cameron comes over, whispers to Muddy and Muddy puts on a three piece suit and goes to a waiting car.  Willie Dixon is waiting in the car (shortly after losing a leg to diabetes) and the group makes way from Westmont to the Quiet Knight in Chicago.  The big deal was the Stones were supposed to show up and they did, captured by Abrahamson’s camera.

The book closes with a photo of an invoice and the amusing story of the royalties listed that Terry got from Muddy and a great shot of John Lee Hooker who had done the music for a Levi’s ad Terry had written the music for. The final page shows Terry, Bob Margolin and Muddy’s friend Karen Dagmar in October 2011 in Evanston.

This book is a piece of blues history.  Sometimes blurry, sometimes stellar, the photos show candidly and behind the scenes shots of some of the legends of the blues.  The book makes for a great coffee table piece to show off to your friends or one to just savor over and over to relive some great blues history.  I loved the book, as any real blues fan would.  I strongly urge you to get one of these for your coffee table or book shelf- it is a wonderful set of photos and the stories behind them!  Bravo to Terry Abrahamson for putting this together!

Posted by Crossroads Blues Society at 11:23 AM