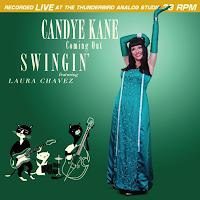 Candye Kane is a survivor and her new CD Come Out Swingin’ is a testament to her fortitude, drive and desire.  While I love many of her old CDs, this one I would have to say is her best.  It truly does what the title says– come out swinging!

Swing music has a history in the blues and jazz.  Louis Armstrong noted on Bing Crosby’s radio show, "Ah, swing, well, we used to call it syncopation—then they called it ragtime, then blues—then jazz. Now, it's swing. White folks yo'all sho is a mess."   While it’s sometimes hard to argue Louis’ point when it comes to music, Candye and Laura have embraced the genre and given us a spectacular set of tunes, eight of which were written by Kane and Chavez and one by Candye alone.

The CD opens with the title cut.  From the first time I heard the tribal opening drumbeats by Fred Rautman going all out like Gene Krupa for us I knew this was going to be fun.  Then Candye, Laura and horn section also give it their all and I was almost winded by the song’s end– what a performance! “Rock Me to Sleep” is a great Benny Carter cover that slows the pace down infinitesimally and stays in the nicely in the swing mode as Kane croons boldly. The piano solo is also cool here, too.  “I’m the Reason Why You Drink” is a funny and bouncing track where Candye tells us a great little tale and Laura also delivers a great solo.  “When Tomorrow Comes” is a nice original soul tune that also swings with great horn play and some organ work by Leo Dombecki.  “Rise Up!” is a Memphis (or even Motown)
-esque R&B original that is upbeat and strident.  Kane gets down and biographical on “Invisible Woman” where she sings emotionally of acceptance and how we can be ignored based on our appearance.  Chavez offers up a haunting performance on guitar here, too.

“You Ain’t All That” is Kane’s song, a spunky reprimand of sorts. In “I Wanted You to Walk (Through That Door) we have a western swing where Chavez offers up some sweet reverb.  “Darling Baby” is the great Holland-Dozier-Holland doo-wop tune that Kane just crushes. “Barbwire Mouth” is a rockabilly cut that Kane blasts through nicely.  Rick Estrin’s “What Love Can Do” follows, a beautiful ballad that Kane offers up with beauty and ease.  The final two cuts are fun and bi-lingual: a shuffling boogie in “Au Revioir  Y’All” and a rockabilly one in “Marijuana Boogie.” French and then Spanish get mixed up and sung as the album completes.  Chavez blows us away with her final guitar solo as does Sue Palmer on piano in a whirlwind of rocking good fun.

The horn section of  Bill Caballero (trumpet), April West (trombone), and Johnny Viau (sax) are spectacular.  Bassists Kennan Shaw and Thomas Yearly are also rock solid as is Billy Watson on harp. Top to bottom the contributors on this album are great!

I can’t say anything bad about this CD.  I loved every song along the way.  Candye and Laura have outdone themselves once again.  The maturation of their songwriting and collaboration and their interplay on the songs themselves while performing are just exceptional.  This album comes most highly recommended for anyone who loves blues, swing and everything in between.  If you were not a Candye Kane “believer” before, then this one will sell you on her.  If it does not, I’d fear that you were dead!