I Know What It’s Like reviewed by Steve Jones 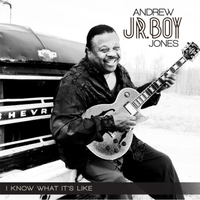 I Know What It’s Like
Andrew JR. Boy Jones


Some guys never come to individual prominence despite being musicians at the top of their game.  Andrew Jr. Boy Jones may be one of those guys.  In 1995 he won a W.C. Handy award with Charlie Musselwhite for band of the year, and in 1997 his  Watch What You Say (Rounder Handy Blues Music Award for 'Best New Blues Artist' and yet his personal recognition really has never gotten him star level recognition for his talents; he joking claims he’s never sucked up hard enough to anyone to become famous.


Well, this album really ought to get some notice.  I loved it; real blues, original cuts with a cool and new sound, a style that hearkens back to the early Chicago electric blues but keeps it new sounding and interesting.  He is an exceptional guitar player and vocalist, he’s got great songs and he’s playing with a tight backing band.


His guitar tone is beautiful; the note ring as he slips up and down the fret board yet give the notes enough air to not over do it..  I was enthralled with his sound– really nicely done


Kerrie Lepai helped with the vocals and she’s a real tiger.  Her voice really steals the show on the two songs she wrote for the CD, “Whiskey Drinkin’ Blues” and “Ready to Play.”  The former gets reprised in a longer version to close out the album and it s super and sultry slow blues cut


The latter is a rollickingly fun song with some cool call and response with the band members.


Whether he is moaning and deep in the blues on cuts like “Movin’ From the Dark Side” or grooving hot and heavy like on “Ive Got You On My Speed Dial” or in incendiary instrumentals like “Mixed Beans,” Jones offers up marvelous songs and stellar performances.  He is a true blues man who can deliver the goods as well as anyone.  I loved this CD and anyone who wants to heard contemporary traditional blues done right needs to pick up a copy and enjoy the hell out of it like I did!