Forgive Me reviewed by Rick Davis 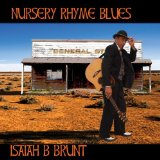 The Australian audio engineer, Isaiah B Brunt, has a long running affinity for traditional American pre-war blues. The Australian become intrigued with the blues at an early age, as he would listen to his father strum his ukulele, blow his harmonica, and play the lap steel guitar. Nursery Rhyme Blues is a follow up to Isaiah's first EP CD titled Isaiah B Brunt. After reviewing his first CD, it was obvious he had broad knowledge of the traditional blues that made the Mississippi Delta famous. The former owner of Darling Harbor studios, Brundt has worked with top Australian groups Rob Hirst, Midnight Oil, Steve Prestwich, Cold Chisel, and Julio Iglesias and his Orchestra on solo projects. During their Australian tours, American recording artists Randy Jackson and Goo Goo Dolls have rehearsed at his studio. He assisted the Keanu Reeves band Dog Star as a sideman during their shows in Sydney. Isaiah was the 2010 Sydney Blues Society's Performer of the Year. As a result of his 2011 IBC performance, he was one of a selected few to receive a review by The Memphis Daily.

His new release, Nursery Rhyme Blues, is a special blend of raw acoustic blues, Delta, hokum, country blues, and New Orleans influenced blues. The traditional roots album has Isaiah's unique approach to the blues, developed around his smooth vocals, guitar, and ukulele. This creative blues style incorporates other instruments like a blues harp, slide, vibraphone, flute, cello, percussion, accordion, and sousaphone, some of which are new to the blues world. Some the tracks capture the sound the early beginnings of blues, heard from the from spirituals, work songs, field hollers, shouts, and chants, and rhymed simple narrative ballads as they echoed from deep South. The new album opens with the simple acoustic ballad "Just A Beautiful Thing."  For the tune "Beale Street Memphis," he adds a New Orleans groove along with Rod Herbert on sousaphone and Brunt on ukulele. The title track "Nursery Rhyme Blues" is designed around lyrics taken from classic nursery rhymes with the addition of guitar, Nick Comino on cello, and haunting background vocals. "Full Moon Breakin'" is a slow blues tune reminiscent of a James Taylor ballad.  "Marilyn Monroe" is an easy rollin' tribute song to the legendary actress, featuring Brunt on harmonica and ukulele and Dahlia Goldfried-Brunt on flute. "Before You Lay Me Down" is tale of a legendary old trailblazer, performed with very lonely, haunting overtones, featuring cello and harp again. Blunt's vocals and harmonica ring out when telling of the tale of "Vinegar Hill." "That Place On The Road" has visions of the legendary tale of Robert Johnson's encounter at the famous "crossroads." The follow up is the grim tune "Time Will Come." "Humming Blues" does a superb job of creating that haunting, lonely, sound of African American workers humming as they worked in the fields. The final track is the original "Over Time" which really showcases Isaiah's acoustic guitar expertise and rich vocals along with the background vocals from Karana Nepe and Paula Punch.

With his unique approach to the blues, he seems to be on track to establish his name in the blues world for years to come. This is one of most creative projects that I have had the pleasure to review.