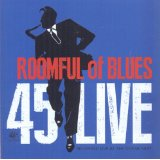 It amazes me how a band can stay in existence for 45 years and never miss a beat. On their way to stardom, many artists have passed thorough the gates of Roomful Of Blues while on their musical journey. Names like Lou Ann Barton, Al Basile, Fran Christina, Mark DuFresne, Ronnie Earl, Preston Hubbard, Porky Cohen, Al Copley, Bob Enos, Doug James, Ron Levy, Sugar Ray Norcia, Greg Piccolo, Duke Robillard, and Curtis Salgado just to name a few, have gone on to being very successful in the music world. The American blues and swing big band from Rhode Island has been performing their own brand of swing, rock and roll, jump blues, boogie-woogie, and soul since 1967. Their longevity has earned the band five Grammy nominations and seven Blues Music Awards, including Blues Band Of The Year in 2005.
Guitarist Duke Robillard and pianist Al Copley formed the band in 1967 to explore jump blues, R&B, and jazz of the 1940s and 1950s. In 1970, they added the horn section, including the tenor and alto sax player Rich Lataille who is the only original band member still with the band today. In 1974, they had the honor of performing with Count Basie. In 1977, along with songwriter Doc Pompus and co-producer Joel Dorn, Roomful of Blues released their debut album on Island Records titled The First Album which brought them to national acclaim. In 1980 Duke Robillard was replaced by another musical legend from Queens, New York, guitarist Ronnie Earl, followed later on by Texas singer Lou Ann Barton sharing vocals with sax man Greg Piccolo. It was at this point that they began touring nationally and also began to attract very large crowds where ever they performed. In 1994, with the release of Dance All Night, they featured guitarist Chris Vachon and harpist/vocalist Sugar Ray Norcia.  It was the next year in 1995, that they released the Grammy nominated album Turn It On! Turn It Up, that brought the band its greatest radio and sales success. In 2003 Roomful of Blues enjoyed another Grammy nominated album That’s Right! on Alligator Records.
Over the years, the band backed artists like Jimmy Witherspoon, Jimmy McCracklin, Roy Brown, Joe Turner, Eddie “Cleanhead” Vinson, and Earl King, stars of the 1940s and 1950s jump blues scene. In addition to their own 23 albums, they appear as guests on albums by Pat Benatar, Colin James, and Stevie Ray Vaughan. Over the years they have played gigs with other artists such as B.B. King, Otis Rush, Stevie Ray Vaughan, Eric Clapton, and Carlos Santana.
Their latest release, 45 Live, marks their 45 anniversary and brings to life the big band/jump blues era with a whole new cast. The current band performs with Chris Vachon on guitar, Phil Pemberton handling the vocals, John Turner on bass and upright bass, Chris Rivelli on drums, and Rusty Scott on piano and Hammond B3 organ. The horn section is one of the best in the business with Doug Woolverton on trumpet, Mark Earley on baritone and tenor saxophone, and the longest running member Rich Lataille on Tenor and Alto saxophone. 45 Live was recorded over three nights at The Ocean Mist club in Matunuck, Rhode Island, March 15-17, 2013. Chris Vachon, the current band leader and producer of the band's six most recent albums, chose 14 of the group's top live and studio swing and jump blues tunes for 45 Live album. They open with the explosive '40s big band tribute "Just Keep Rockin'" from the 2005 album Standing Room Only. They move right into the tune "It All Went Down The Drain," recorded by the New Orleans legend Earl King Johnson on his Grammy nominated album Glazed. The next song in this superb live collection, featuring Doug Woolverton on trumpet, was the Hank Williams number "Jambalaya" recorded on the 1979 Roomful Of Blues album Let's Have A Party. They slow things down with the legendary Samuel "Magic Sam" Gene Maghett tune "Easy Baby" from the1997 Roomful Of Blues album Under One Roof, featuring unsurpassed guitar solos from Chris Vachon. The Ocean Mist club heats up with the Eddie Lambert / Chris Powell tune "That's Right" a Grammy nominated number for Roomful Of Blues on the album with the same name. The show continues with the Big Joe Turner song "Crawdad Hole" taken from their 1983 album Blues Train.  The band is dazzling on the B.B. King / Sam Ling tune "You Don't Know." The band has not performed the 1984 title track "Dressed Up To Get Messed Up" for over twenty years. The tune was written by former Roomful Of Blues saxophone player Greg Piccolo. This all-star swing band comes alive on the instrumental "Straight Jacquet" written by long standing member Rich Lataille, featuring solos by most of the band members. The highlight of the live album is the Gibson / Rushing / Basie tune "I Left My Baby" done on the 1995 Roomful Of Blues album Turn It On, Turn It Up. The live performance features once again the song writing expertise of  Chris Vachon, with original tunes "Blue, Blue World" and the title track "Turn It On, Turn It Up" an original tune that in my opinion was the highlight of the 45 year span of Roomful Of Blues. Big Bill Broozy's "Somebody’s Got To Go" is another classic that the band performed regularly with saxophone legend Eddie 'Cleanhead' Vinson. The show concludes with Mark Earley's "Flip Flap Jack" recorded originally on the album Standing Room Only.
Roomful Of Blues has always been and continues to be today, one of the finest swing / jump blues bands in existence. As I mentioned in my opening statements, this band has withstood the test of time and never changed in musicianship. Showcased by a number of vocalists over the years, Phil Pemberton has one of most dynamic voices so far. I think you will agree that 45 Live is a culmination of their best work to date.