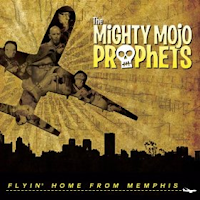 I would be remiss not to include The Mighty Mojo Prophets as one of the newest groups on the California blues scene today. As a result of their debut album in 2011, The Mighty Mojo Prophets, they earned a 2012 Blues Music Award nomination for Best New Artist Debut, performing for the event's pre-party celebration on May 10, 2012, at the Cook Convention Center in downtown Memphis. Still reeling from their 2012 Blues Music Award nomination for Best New Artist Debut, The Mighty Mojo Prophets are back with their second release this time on Delta Groove Music Flyin' Home From Memphis. Fueled by the superb vocals of Tom "Big Son" Eliff and the masterful guitar work of Mitch "Da Switch" Dow, The Mighty Mojo Prophets were established originally in 2007. Completing the band are Alex Schwartz on drums, Dave Deforest on bass, Mike Malone on piano and organ along with backing vocals, Mark Sample on tenor sax, Johnny V. on trumpet, San Pedro Slim on harp, and Alex "Lil A" Woodson also on harp from the group Lil A and The Allnighters.

Music Flyin' Home From Memphis combines swingin', jumpin' West Coast Blues with other regional blues styles such as Chicago and Texas blues, Memphis soul, country blues and progressive rock ‘n’ roll. The Mighty Mojo Prophets start the party with the shuffle "Sweetness," capturing the band in perfect harmony. They "swing" into the West Coast sound with "The Gambler" featuring one solid rhythm section in addition to possibly one of the best vocalists and guitar players in the business. San Pedro Slim takes control as he rips into his harp, William Clarke style, on "Lucky Man." Added to an already spectacular band is an all-star horn section and Mike Malone on organ, spotlighting the tune "I Can't Believe." Mitch "Da Switch" Dow opens and continues with a little Elmore James slide guitar on "The 45." Returning home from Memphis, The Mighty Mojo Prophets are grooving to "California," reminiscent of the jump blues tune Caldonia, done in 1945 by Louis Jordan. "Remember Me" is a slow blues tune with Eliff asking his baby to remember him with fond memories. "One For Me" implements a driving rock 'n' roll beat that would even please Chuck Berry. They keep the retro rock theme going with a "Strong Medicine" with a resonating Bo Diddley beat. "Jo's Jive" is the only instrumental rocking from coast to coast with a series of T-Bone Walker style riffs. The country-blues tune "She's Gone" shows some elements of jug band music with a little New Orleans style piano. Eliff  cautions to watch out for that "Street Corner Preacher" who is nothing more than a panhandler. This eclectic collection concludes with another New Orleans style cautionary tale entitled "Whatulookinfor."

If you had the opportunity to hear their debut album released on Rip Cat, you owe it to yourself to pick up their sophomore release Flyin' Home From Memphis on Delta Groove. It is a superb CD with song writing and arrangement done by the solid team of Dow and Eliff. It is an album you won't forget!